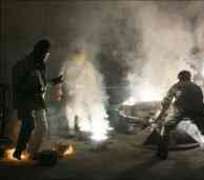 The European Union has agreed to meet Iran to begin long-stalled talks on its controversial nuclear programme, EU officials have said.

The EU has accepted the date of 5 December put forward by the Iranians earlier this week, but a venue has yet to be agreed.

Officials said the EU suggested holding the talks in Austria or Switzerland instead of Iran's proposal, Istanbul.

If Iran agrees, they would be the first formal talks in more than a year.

Iran denies the charges, saying that it is pursuing a civilian atomic programme designed to meet its energy needs.

Increasing pressure
The EU's foreign affairs chief Catherine Ashton sent a letter proposing a date and venue for the talks in response to an offer from Iran's chief nuclear negotiator, Saeed Jalili.

Lady Ashton – named EU foreign affairs chief last December – has been given a mandate by the five permanent members of the UN Security Council, plus Germany, to lead the negotiations with Iran.

“The meeting would be somewhere in Europe, most probably in Switzerland. A second, subsequent meeting may also be proposed for Istanbul,” an EU official, speaking on condition of anonymity, told the Reuters news agency.

Tehran's suggestion of Istanbul as a venue was seen as potentially irritating to the US, as Turkey set up a nuclear-swap deal with Tehran earlier this year just as Washington was bolstering sanctions against Iran.

If the date and venue are agreed, the talks with representatives from each of the six world powers could last two days to have “sufficient time for a full and in-depth exchange of views”, according to excerpts of the letter seen by news agencies.

Pressure on Iran to return to the negotiating table has strengthened since the UN, US and the EU began imposing tighter sanctions on the country in June.

Last month, the New York Times said the Western side was drawing up a tougher offer for Iran than the one rejected by the country last year, requiring it to send two-thirds more low-grade enriched uranium out of the country than the previous deal.