PALIN E-MAIL HACKER SENTENCED TO A YEAR IN CUSTODY 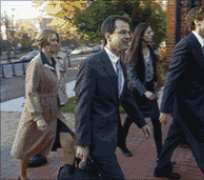 A student convicted of hacking into former Alaska governor Sarah Palin's email account in 2008 has been sentenced to a year in state custody.

Defence lawyers described the offence as a youthful prank. Kernell was a 20-year-old student at the University of Tennessee when he committed the crime.

The judge recommended his term be served in a halfway house, not prison.

Ms Palin, the 2008 Republican vice-presidential candidate, compared the hacking to the Watergate scandal that brought down President Richard Nixon.

Kernell, son of Democratic Tennessee state legislator Mike Kernell, apologised to Mrs Palin and her family after the sentence was handed down.

Prosecutors had sought 18 months in prison but said they would be satisfied with the judge's recommendation.

In 2008 a hacker broke into a Yahoo! e-mail account used by Ms Palin and revealed several inconsequential personal messages. The FBI traced the internet traffic to Kernell's apartment in Knoxville, Tennessee.

Ms Palin did not immediately comment on the sentencing. When Kernell was convicted she wrote on Facebook: “My family and I are thankful that the jury thoroughly and carefully weighed the evidence and issued a just verdict.”

There is much speculation in the US over whether Ms Palin will run for president in 2012.

The former governor is never far from the headlines, and is the subject of a new reality show, Sarah Palin's Alaska, which debuts in the US on Sunday.