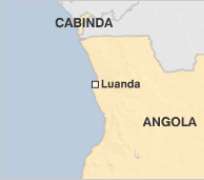 An Angolan minister tells the BBC that a convoy carrying Chinese mine workers was attacked in the region of Cabinda this week.

A faction of the Cabinda separatist movement Flec has said it carried out Monday's attack.

Secretary of State for Human Rights Bento Bembe condemned the attack as the work of “terrorists”.

In January, Cabinda independence fighters attacked a bus carrying the Togo national football team to an African Cup of Nations match in the province, killing two people and leaving nine others wounded.

Flec (Front for the Liberation of the Enclave of Cabinda) has been fighting for three decades for independence in Cabinda, an area separated from Angola by a strip of the Democratic Republic of Congo.

Despite being rich in oil, the region is one of the poorest in the country.