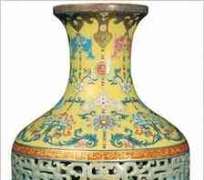 A vase found in a house clearance in London has been sold for £43m, thought to be a record for any Chinese artwork.

The 18th Century Qianlong porcelain piece, found in Pinner, had been estimated to fetch up to £1.2m for the brother and sister who inherited it.

Ivan Macquisten, editor of Antiques Trade Gazette, said the vase would have been made for the Qianlong emperor.

The 16in high vase is yellow and sky blue in colour with a fish motif on the front and a perforated outer wall.

The private buyer – who is thought to have come from the Chinese mainland – paid £43m, with an additional premium of £8.6m to go to the auctioneer.

The auctioneers found the vase in the bungalow which the brother and sister inherited from an uncle.

'Atmosphere electric'
Mr Macquisten said there was a “queue of dealers and collectors” to see the vase.

He said: “It dates to between mid to late 18th Century and it would have been made for the Qianlong emperor.

“He was the emperor in China when China was at its zenith, effectively creating the empire you see today. And this is one of the great works made for one of his palaces.”

Peter Bainbridge, from Bainbridge's auctioneers, based in Ruislip, said the value of the vase was realised when items were being unpacked to be catalogued for sale.

“When it was on the shelves ready to be catalogued our consultant valuer paused at it and said 'I have a feeling this is quite interesting'.

He said the atmosphere at the auction was “electric”.

“The Chinese contingent had been in very smart sale rooms all week and I think found it rather curious to come out here, and mix amongst buyers who we were selling fridges and cookers to, and the like.

“Then the silence wrapped itself around the sale room as we progressed through this very exciting bidding.”

Describing the reaction of the brother and sister duo Helen Porter, from the auction house, said: “They were hopeful but they didn't dare believe until the hammer went down.

“When it did, the sister had to go out of the room and have a breath of fresh air.”

The ceramic vase was made during the reign of the fourth emperor in the Qing dynasty who ruled the empire from 1735 to 1796.

It is thought the vase left China in about 1860 and was acquired by an English family during the 1930s but how it made its way to the bungalow in Pinner is a mystery, the auctioneer said.

A posting on the auctioneer's blog said: “It is a masterpiece. If only it could talk.”

Ivan Macquisten, editor of Antiques Trade Gazette, says the vase is “something special”