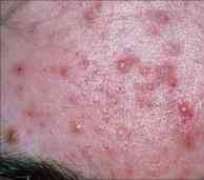 People being treated for severe acne should have their mental health closely monitored, a study reports.

But a popular acne drug was not found to increase the risk of suicide, despite previous findings.

The study of 5,700 people, in the British Medical Journal, was carried out at the Karolinska Institute, Sweden between 1980 and 2001.

It has been used since the 1980s to treat severe acne if a course of antibiotics does not prove effective.

But there have been reports linking isotretinoin to depression and suicidal behaviour.

So Dr Anders Sundstrom and his research team from Sweden studied suicide attempts before, during and after treatment with this drug for severe acne.

Continue reading the main story
'
Start Quote
Acne can have significant psychological effects .'
Dr Sarah Bailey
University of Bath
They found that 128 of the 5,700 patients investigated who were taking the drug were admitted to hospital for attempted suicide.

The risk of suicide was highest within six months of ending treatment – but the researchers say this is most likely to be because patients whose acne improved following treatment were distraught if there was no improvement in their social life, rather than anything to do with the treatment itself.

They stress that attempted suicide was a rare event – the figures suggest just one person out of every 2,300 individuals taking isotretinoin will make a first suicide attempt.

Monitor patients
Dr Sundstrom said of his findings: “The underlying condition of acne is a more important factor for suicide attempts. We are not certain the drug adds anything.”

Writing in an editorial in the BMJ, Australian acne experts John Sullivan and Parker Magin say that the Swedish research is important given the complexity of the issue.

“It is difficult to tease out the relation between mental health and isotretinoin because acne itself is associated with psychiatric morbidity, including depression.”

They also say that the study shows GPs must closely monitor acne patients on isotretinoin.

“During and after treatment with isotretinoin (perhaps, especially, unsuccessful treatment), patients should be carefully monitored for depression and suicidal thoughts.”

Dr Sarah Bailey, lecturer in the Department of Pharmacy and Pharmacology at the University of Bath, said: “This is an important paper that strengthens the view that acne itself can have significant psychological effects and that there is a low risk of suicide for some acne patients.

“However, the controversial issue of increased suicide risk with isotretinoin use is not resolved by this paper, which the authors themselves acknowledge.

“Perhaps their most interesting and novel finding is that the risk of suicide is increased AFTER treatment has stopped and therefore it is essential to continue to monitor patients carefully.”