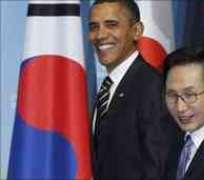 Leaders of the G20 group of major economies have agreed to avoid “competitive devaluation” of currencies after a second day of difficult talks in the South Korean capital, Seoul.

Tensions had been high between some delegations over how to correct distortions in currency and trade.

But the agreement fell short of a US push to limit trade deficits.

Some fear the conflict, chiefly between China and the US, may threaten global growth.

US President Barack Obama said there should be no controversy about fixing imbalances “that helped to contribute to the crisis that we just went through”.

“Emerging economies need to allow for currencies that are market-driven. This is something that I raised with President Hu of China and we will closely watch the appreciation of China's currency.”

'Slowly, slowly'
Some of what the G20 agreed had already been done by their finance ministers – the commitment to refrain from competitive devaluations, for example. The summit did not manage to harden that up, as had been suggested, with a promise to avoid competitive undervaluation. That would have put more pressure on.

On the related issue of global imbalances, which is partly about international trade, they agreed to develop indicators to show when imbalances need to be reduced. That work is due next year.

It is progress but slow, rather like China's commitment to move to a market-based exchange rate. They say they will do it, but in their own time, in other words not tomorrow. So there was no breakthrough in these key areas, but the very public endorsement of political leaders perhaps gives a little more weight to such commitments as they have made.

However, Chinese officials argue that Beijing has an “unswerving” commitment to reform its currency regime, but that global economic stability is needed to achieve it.

UK Prime Minister David Cameron said progress was being made on the issue of imbalances.

“Slowly, slowly China is moving into a position of actually increasing domestic consumption, rebalancing its economy,” he said.

However, the agreement to develop new guidelines to prevent so-called “currency wars” fell well short of the 4% limit on national trade deficits and surpluses proposed by the US, which had been blocked by China and Germany – the world's two largest exporters.

“This was never going to be solved overnight,” Mr Cameron added.

And South Korea President Lee Myung-Bak admitted that “on the foreign exchange rate issue, principles were agreed at the finance ministers' meeting, but there was no word on when and up to how much we will implement them”.

'Fractious' negotiations
The G20 leaders also gave their backing to reforms designed to give emerging economies such as China a bigger say in the International Monetary Fund.

In their communique, leaders said they were delivering “a modernised IMF that better reflects the changes in the world economy through greater representation of dynamic emerging markets and developing countries”.

UK sources say that officials from the UK, France and Russia had to be called in the early hours of this morning after “fractious” negotiations between China and the US broke down in “acrimony”.

But at the end of the summit, the European Union said in a statement that it was “satisfied” with the outcome.

The G20 also committed itself to completing soon the long-running Doha Development Round of global trade talks, saying that 2011 presented a “critical window of opportunity, albeit narrow” to conclude the discussions.

And it signed the Seoul Development Consensus for Shared Growth, committing it to work in partnership with other developing countries on trade, development and investment.

Irish debts
The G20 group comprises the world's 19 leading national economies, plus the European Union. It was formed in 1999, and held its first meeting that year.

Until 2008 the G20 was overshadowed by the smaller G8 grouping of France, Germany, Italy, Japan, the UK, the US, Canada and Russia.

However, this has changed since the global financial crisis of 2008, and the G20 has effectively now replaced the G8 as the main global economic forum.

The major growth in the economies of G20 members China, India and Brazil has also contributed to the rising importance of the grouping.

The G20 currently meets twice a year, but this is set to reduce to one meeting from 2011.

As Irish bond yields reached a fresh high, leaders discussed the Irish Republic's debt crisis amid concerns that the European Union will have to step in.

“Any new [bail-out] mechanism would only come into effect after mid-2013 with no impact whatsoever on the current arrangements,” finance ministers from the five countries said in the declaration.

The statement seemed to have an impact on the bond market, with Irish bond yields dropping to 8.2%, down from the record high of 8.95% reached on Thursday.

But world stock markets fell in Friday trading as investors worried about Irish government debt, as well as possible measures in China to tackle inflation.