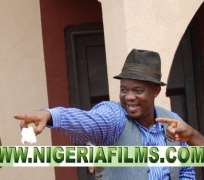 Nollywood actor and director, Charles Inojie, was recently in London where he picked up two awards at the Africa Film Festival and Academy Awards (ZAFAA) 2010. In this chat with Reporter, Ovwe Medeme, he speaks on the need for proper funding of the movie industry, his life as a comedy actor and upcoming production.

You recently received two awards as an actor, what was the feeling like?

It was an academy awards otherwise known as ZAFAA recently held in London. Before the event proper, I was nominated for two categories Best Actor in Supporting Role and the Best Comedy Actor for my role in the movie Best Honeymoon. At the event proper, I was shocked to my foundations when I picked the two coveted awards. For me, it was a very major turning point in my career. Of course I have won some awards in the past but for me, this was very major.

How did you start?

Professionally, I started out in year 2000 after my graduation from the university in 1999. I started out as an assistant director. Eventually, I started doing my own films as a full fledged director. Along the line, I found myself doing one of those run-off-the-mill roles. Somehow, those few roles began to add up and it kind of stuck my face in the heart of the viewing public. Today, producers actually call me, not just to direct, but to actually take up roles and that for me is a huge plus.

You are known for comedy, has it in anyway affected your lifestyle?

It has, in an enormous way. Charles Inojie ordinarily, is a very serious person. I am a shy person. That, juxtaposed vis-à-vis the comic roles that I play, gives me a split personality. Whereas I am the shy type, the roles I do are on the opposite side. That makes me, at all times, run a battle of trying to delineate myself from the roles that I play. That for me has not been very easy. Added to that, would be the fact that, it has tremendously altered my lifestyle in the sense that things that I could do before, many of them, I cannot do today. When I was solely behind the camera calling the shots, nobody knew me. Then, I could get away with basically anything.

When you try to make a point and people do not take you serious, how do you react?

It could be very frustrating. Sometimes when I dress up to attend events just like every other person, I arrive and people feel I am trying to deceive them. There are places I go to, when I try to get involved in some intellectual discourse, people get surprised and they tend to embarrass me. Even in church when I try to enjoy some solemn moments in the presence of the Lord, people still draw attention to me in an embarrassing way.

You started out behind the scenes and now you are picking awards as an actor. Of the two worlds, which would you prefer?

I think any day, I would still prefer being a director in the sense that it makes me God's deputy. To me, it is a way of continuing the creation. Giving life to a piece of dramatic literature is a very pleasant experience. It is something that is always very enjoyable. The pleasure of recreating a particular scenario keeps me going. Acting is what I do when I want to enjoy myself. I am not so much involved beyond the limits of interpreting my individual character. I come on set, the director tells me what to do, I go ahead to do it. As a director, I am there from the beginning to the very end. I am concerned about the welfare of my artists. That, to me, is always very fulfilling. If you ask me, I would rather be a director.

What project are you presently working on?

Reverend Father Emmanuel Ede, a popular Catholic Priest of great intellect has been involved in the study of Igbo metaphysics. I am working presently on a docudrama which is a product of the book he has written titled The First Articulation of Igbo Metaphysics. The drama, as much as it is not intended to be commercial, is a way of trying to further expatiate and throw more light on the issues we raised such that, it would be largely understood by wider members of the reading public.

So far, how is the production coming up?

It has been fantastic. I have the likes of Zulu Adigwe who is doing the narration. I have Amaechi Muonagor and some other very fantastic actors and actresses. I am directing it.

These days, places like Asaba and some parts of the east have been very busy in terms of locations. What does that portend for the Nigerian movie industry?

That is not strange. Producers are always on the move, they are like locusts. With any given season, they drift to another locality. With producers, if they find out that the cost of acquiring locations, props and logistics is cheaper at a particular place, they all drift towards that place. When it becomes obvious that the locations there too have been overused, they migrate again. Over and beyond, that would be the fact that there are stories that cannot be shot in Lagos. For instance, with stories that have village locale, it is only necessary that you go to a place where you have the right location. Presently though, I would say that Asaba is benefiting from what Enugu lost. At a point, we started to have problems of security in Enugu. We also had issues of stolen equipment, so the producers migrated to Asaba.

As a movie director, are you satisfied with the kind of work you produce?

My answer would be in twofold. Yes, I am satisfied given the condition under which I work, given our operational environment and given the budget with which I have to work. I think I am doing my best to get the job done. Again, I would say no, I am not satisfied because I know that I have the capacity and the potentiality to do much more if given the necessary enabling environment. If given the necessary budget with which to do a good job, I could do better. In that light, I am not satisfied with my kind of work.

What would you regard as an enabling environment?

Power has been a major issue in our movies. That is so because virtually everywhere you go in Nigeria, people operate on generators. If I am shooting in a particular street and they have between twenty to thirty generating sets working at the same time, there is not magic that will make me not have poor sound quality for the recording that I will be doing. If the government is able to fix power such that I do not have to shoot under such environment, I would have better sound quality. Also, there is the issue of piracy. It is unfortunate that the government does not recognise the fact that the entertainment industry in Nigeria is about the highest employer of labour. The government does not realise that if the entertainment industry in Nigeria is thriving and operating at full capacity, the issue of kidnapping, armed robbery and other social vices would be at its lowest ebb. Nigerians are very talented. Many of them want to explore their creative ability but because the environment is not conducive, you find people indulging in vices. If anything, the government should take the issue of piracy serious. Everywhere else in the world, there is what we call 'film fund'. The government should have a pool where producers can draw from when they want to make movies.

What is your take on the promise by President Goodluck Jonathan to make credit facilities available to the entertainment industry?

I would like to say it is a welcome development but we have come to discover that in this era of elections, it is not out of place for politicians to make promises. I only hope that this is not one of those promises that never get to see the light of day. Also, implementation has always been an issue in Nigeria. People come out with very laudable projects and promises but when it comes to implementation, it becomes a monumental flop. I pray that this does not become one of such. Part of the bane of the entertainment industry is the fact that, there are those who are not practitioners but who have the political connections to access funds that are meant to better the lot of practitioners. This does not aid the industry in anyway.

What is the next thing for you?

I am almost set to go with my production. I am working on a huge Esan language film. I have discovered that by the very special grace of God, the level he has placed me in the movie making business in Nigeria, I would have failed my generation if I do not affect the quality of movies made in my own language. I believe that my people have a very rich cultural heritage; I believe that they have one of the richest cultures in Nigeria and our stories are profound. Therefore, I would like to make very beautiful movies in my dialect.

By doing that, do you not think you are limiting your audience?

That has always been the problem. Film has no language. As a young boy, I watched Indian films. Then, they were not subtitled in English. We understood them then. We were able to follow the story line and identify with the various characters. Today, technology has made subtitling very easy. As a matter of fat, I would be expanding my scope instead of limiting it.

What is Charles Inojie all about?