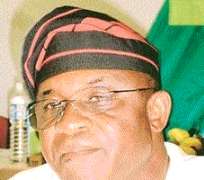 Mark
Attempt by the Senate to unearth the illegal release of the vessel, 'Grand America' that brought e-waste to the country led to buck-passing and name-calling by the Federal Agencies responsoble for the regulation and management of the nation's ports.

The waste which surprisingly found its way to the ports comprised electronics at their end life. iOfficials of the Nigerian Ports Authority and National Environmental Standard and Regulation, Enforcement Agency that appeared at a Public Hearing by the Senate Committee on Environment yesterday openly traded blames on who was responsible for the release of the vessel, Grand America that berthed in Nigeria with containers of e-wastes.

In the same vein, the Nigerian Maritime Administration and Safety Agency identified the breakdown in communication among the agencies and lack of effective coordination in the process of inspection of the containers, as responsible for the problem.

The Senate Committee on the Environment chaired by Senator Grace Bent had ordered NESREA to fully carry out investigation and inspection on the shipments with a view to bringing the culprits to book.

NESREA had on September 29 received an alert from its international allies that a vessel, Vera D was expected to berth on Octover 6, 2010 at the Tin Can Island Port with containers of hazardous waste that slipped through the authorities in the United States of America.

Following the alert, the agency conducted an investigation on the vessel during which waste products were found. While another inspection was to be carried out on other containers, it was gathered that the Nigeria Ports Authority and the Nigeria Customs Service allowed the vessel to sail out of Nigeria's territorial waters.

The Senate Committee on Environment which queried the action of the agencies described the development as a violation of the Harmful Waste (Special Criminal Provisions, etc) Act of 2004 which barred the importation, dumping, carrying or depositing harmful wastes on Nigerian shores.

Chairman of the Committee, Senator Grace Bent noted that the Act provided that any vessel bringing in toxic waste to the country should be seized and the culprits given a life sentence. He added that releasing the vessel amounted to disrespecting the laws of the country in favour of international conventions.

Director General of NESREA, Mrs. Ngeri Benebo had while briefing the Senate Committee said Vera D was released after the agency received a written approval from the Minister of Environment Mr. John Odey. He added however that the toxic containers were loaded back into the vessel and sent back to its country of origin after the fine of N15 million was paid.

Mrs. Benebo noted with dismay that on the morning of October 18, 2010, NESREA discovered that the Grand America Vessel had been permitted to sail while Vera D was still detained without recourse to NESREA on the excuse that there was no official letter of detention for the ship.

In his own submission, the Managing Director, NPA, Alhaji Abdulsalam Abubakar, said the ships were released in line with extant conventions adding that there was no formal document from NESREA requesting that the vessel, Grand America be detained.

According to Abubakar; 'The vessel was not detained because the vessel did not break any law and there was no order from the court ordering its detention. NASREA needed a court order to detain the ship, because intervention conventions would not allow the ship to be detained'

Speaking in the same vein, the Director General of NIMASA, Mr. Temisan Omatseye, said Nigeria is a signatory to several international conventions and sits at the International Maritime Organization adding that based on that his agency was not in a position to seize the vessels thus insisted that the shipping agents were responsible for the liabilities of the vessels.

He however said that a legal action can still be initiated against the shipping line even after an indemnity has been obtained from the shipping agents. When asked about the criteria used in arriving at the fine, Minister of Environment Mr. John Odey said there was no formal document referred to but had to impose the fine to serve as deterrence.

In her remarks, Chairman of the Committee Senator Bent assured that the National Assembly would work to amend the law to ensure that stiffer penalties for vessels sailing into Nigeria with toxic wastes adding however that the government agencies including NESREA, violated the Harmful Waste Act and should take responsibility for the release of the vessels.