WRITERS HONOUR MIMIKO, OTHERS IN AKURE 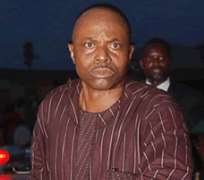 Governor of Ondo State, Dr Olusegun Mimiko and some prominent indigenes became patrons of the Association of Nigerian Authors (ANA), during the awards/dinner of the association held recently in Akure, the state capital.

At the 29th ANA international convention, which held under the theme, Myth, Fantasies and the Indigenes Theatre to a celebrative end, the writers showered encomiums on the governor and eventually decorated him as ANA Special Patron.

Others who received honours include Juju maestro, King Sunny Ade and Chief Seinde Arogbofa, an author and retired school principal who bagged the State Patron Awards respectively. The late D.O. Fagunwa, whose legendary writings in Yoruba language explored myths, fantasies and the lore of his people, was also honoured with a post humous merit award.

In his remarks, Mimiko who thanked the donors of the awards also promised to support the association and its activities for literary development. The governor used the occasion to announce the proposed first tourism expose billed for the famous Idanre Hill in December. The event, according to the governor, would feature festivals and mountain climbing events, all in a bid to celebrate nature.

Earlier at the convention, writers who distinguished themselves in the different genres and categories of creative writing were accorded honours and recognitions. The nominees and winners include the following:

In the children category, The Missing Chick by Okorofor Spencer clinched the ANA/FUNTIME Classic Prize for Children Literature, while James Uwaleke's Bambam and Little Uche was adjudged best for the ANA/Atiku Abubakar Prize for Children Literature. ANA/ Lantern Prize went to The City I Love by Oyeyinka Onibogun, while Oye Oyenike's Path of Sinai won ANA/Mazariya Teen Author's Prize. The first Esiaba Irobi Prize instituted by Professor Kalu Uka was won by Isaac Attah Ogezi's Waiting for Savon, and the Literary Journalist of the Year Prize was picked by Abimbola Adelakun of The Punch Newspaper. Prior to the announcement of results, a member of the jury, Maria Ajima had told the gathering that the shortlisted works were drawn from over 200 entries with a theme on the rising violence and the oppressive conditions in the Niger-Delta.