JUBILEE VOICES FROM THE BAPTIST 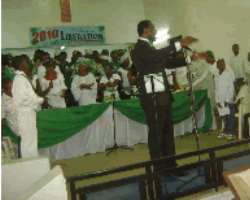 
In celebration of Nigeria's golden jubilee anniversary, the combined choir of Ajayi Dahunsi Memorial Baptist Church recently praised their creator through songs. They equally cut the anniversary cake at their Ilasamaja base, in Mushin area of Lagos.

The choir, comprising 50 choristers, appeared in green and white attires, while praising God in songs of diverse genres, including Yoruba, pop and the classic.

Some of the songs include Odun Idasile ti de, the Year of Jubilee, Days of Elijah, Lord Jesus give us peace, Chineke na nde ewo, Imela, Abasi so song o, We are grateful, Now thank we all our God, The Lord be magnified. Praise and glory be to Jesus, as well as E yo ninu Oluwa, E yo!. Tagged Lift Your Voice, It's the Year of Jubilee, the concert saw choristers singing and dancing to the admiration of the congregation who joined in the frenzy.

Aside the songs, the choristers thrilled guests with a drama presentation entitled, The Christ Proclaimers. The drama which sought divine intervention to resolve Nigeria's problems had its conflict centred on disunity and intolerance on the part of the people. The highly didactic drama also thrived on the controversy surrounding transfer of power. This happened when no consensus was reached on who should lead the people. Eventually the play ended with a statement that whoever will solve Nigeria's problems must be given the chance.

One of the highpoints of the concert was a prayer session for Nigeria by the church's pastor, Reverend Emmanuel A. O. Oguntokun, the immediate past 1st Vice President of the Nigerian Baptist Convention.

Oguntokun prayed that Nigeria would not only prosper, but will excel, adding, ' Nigeria is blessed, the President is blessed. Nigeria will not be a failed state. And every worker of iniquity will be put to shame.'

While recalling his experience during independence, the cleric said: ' I was living very close to the place where it happened. I watched it all. So, it is a kind of nostalgic feeling for me. I can still remember what happened. We are happy and we put up this concert in a combined choir: the women choir, which sings Yoruba, the children, which sings pop and the sanctuary, which sings classic.'

He explained further that using a combined choir was a subtle statement that Nigeria should be in unity. His words: 'These are the people who sing differently but we have brought them together. Our first anthem says though tribe and language may differ, in brotherhood we stand. So we should be together and God will keep us together. We also pray that God will save Nigeria from the cases of armed robbery and kidnapping which are now endemic in the country.'

Reacting to the recent bomb blast in Abuja, Rev. Oguntokun said it was a painful one indeed. 'It shows that some people are disgruntled. We pray that God Almighty will minister to their hearts. There is one thing to arrest them and want to deal with them but the important thing is for God to minister to them,' he stated.

According to Oguntokun, 'Jubilee is freedom from slavery, from poverty and freedom generally, because it is freedom, you must know Jesus to be truly free. So it is the duty of every pastor, every member to go out and blow the trumpet of jubilee.'

On the 2011 elections, the cleric prayed that INEC would get it right in a one-man, one-vote manner. 'We hope that every vote will count and every man will be happy. Zoning or no zoning, Nigerians should pick somebody whom God has ordained, a man after God's heart,' he added.

After the performance, Music Director, Olufemi Oguntokun said, 'We shared the joy of God in singing. When we sing, it moves God. Singing is praise and God will be moved to bless us as individuals and as a country.'

He explained that the church combined three choirs: the morning star for the aged, the sanctuary for all ages and the youth choir for the young ones to emphasis the unity of the different peoples in Nigeria.