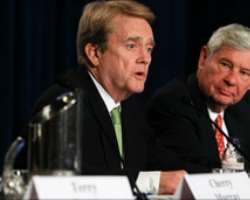 Three major companies involved in the Gulf of Mexico oil spill lacked a safety culture and made serious mistakes ahead of the catastrophe, the key inquiry into the disaster has said.

The White House oil spill commission said there was a culture of complacency at BP, Transocean and Halliburton.

“There was not a culture of safety on that rig,” co-chair Bill Reilly said.

The explosion on the Deepwater Horizon drilling rig killed 11 workers and polluted hundreds of miles of coast.

'Rush to completion'
Mr Reilly called for “top-to-bottom reform” at the companies involved in the well, known as the Macondo well, and faulted a “sweep of bad decisions” by the three companies.

At a meeting on Tuesday of the National Commission on the BP Deepwater Horizon Oil Spill and Offshore Drilling, investigators, witness and panel members said BP was hurried and could have operated more safely if it had taken time to acquire necessary material and kit.

“There appeared to be a rush to completion of the Macondo well and one has to ask where the drive came from that made people determine they couldn't wait for sound cement or the right centralisers,” Mr Reilly said.

The panel had previously said the cement used to seal the well may have contributed to the blow-out that caused the explosion, and said the two companies had test results showing the cement was unstable.

Mr Reilly's remarks came a day after the panel's chief investigator said he had found no evidence BP had made risky decisions in order to save money.

Back in the summer, the narrative was clear: BP was in such a hurry to finish the well that it cut corners, chasing profits above everything.

No longer is BP being singled out. Transocean and Halliburton, BP's two main collaborators, are also in the firing line.

White House investigators say they have yet to discover a single example of an individual action which put profit before safety.

But the same panel has suggested that commercial pressures played an important role in the disaster.

While BP executives can perhaps take some comfort from the fact that the president's own investigators agree with about 90% of the company's internal findings, the oil giant is hardly being let off the hook.

In any case, members of the panel have already made it clear that they are less interested in apportioning blame than identifying lessons to improve the safety of deep-water drilling.

Fred Bartlit challenged claims by members of the US Congress that choices made for economic reasons had increased the danger of a spill.

There was “no evidence at this time to suggest that there was a conscious decision to sacrifice safety concerns to save money,” he said on Monday.

“We see no instance where a decision-making person or group of people sat there aware of safety risks, aware of costs, and opted to give up safety for costs.”

The White House commission is not due to report until January.

Republicans in Congress have been reluctant to grant additional authority to the panel, analysts say.