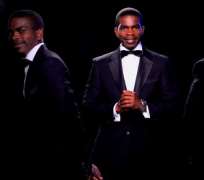 After several weeks of intense planning and coordination, the day is finally here for the much expected 10th anniversary celebration of one of Nigeria's most remarkable speakers, compere and stand-up comedians Holy Mallam.

From what started as an impossible adventure, and a task far heavier than his lanky shoulders could carry, the ethical comedian has gone on to build one of the most successful careers in his industry, grabbing some of the biggest clients and hosting some of the biggest corporate and family events around. He's dabbled into music; hosted TV shows, founded his own events company and established himself as about the only stand-up act in Nigeria's comedy industry who has not built his fan base on vulgar, obscene or caustic jokes.

Ten years after, he's leaving no stones unturned in celebrating the success even he could not have envisaged. 'Many told us we would
fail' he says. 'They gave me a thousand and one reasons why my style wouldn't work and I'll soon bow to pressure and start doing what everyone else is doing. But this is 10 years after and we're still going on strong with our ethical comedy'.

'It's a dream come true for me, and I'm happy God has been able to use me to inspire many in my generation that you don't have to be dirty, vulgar or obscene to be popular and accepted'.

And on Sunday November 14, the comedian's multitude of fans will join him and his colleagues at the lagoon Restaurant in Victoria Island, Lagos, for an evening of comedy, music and theatre. The grand performance will feature appearances from comedy godfather Ali Baba as well as bonafide crackers Teju Babyface and 1st Bon; while Mike Aremu, Buchi, Bouqui, Midnight Crew, Big Bolaji, Freeborn and Rooftop MCs will deliver live music.