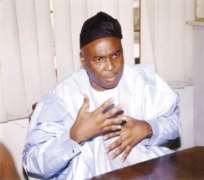 San Francisco, Nov 08, (THEWILL) - The Nigeria Governors’ Forum at the weekend said it donated over N62 million (Sixty–Two Million Naira only) to the family of late Yobe State Governor, Alhaji Mamman Ali, who died at a United States hospital in January 2009 after a prolonged battle with leukaemia.

A statement signed by Director General, Asishana Okauru Esq. and emailed to THEWILL said: “Chairman of the Forum, H.E. Executive Governor of Kwara State Dr. Abubakar Bukola Saraki, handed over the money to the family of the late Governor in a ceremony at the Kwara State Governor’s Lodge in Asokoro, Abuja.

“Yobe State Deputy Governor, Abubakar Ali, a brother to the late Governor, represented both the state and his brother’s family at the event,” Okauru said adding that “Dr. Saraki prayed for the repose of the soul of the late governor, who he described as a committed member of the NGF and a patriotic Nigerian who served his state and country well during the 51 (fifty-one) years he lived on earth.” The Kwara State Governor said the NGF was yet to recover from the death of Alhaji Mamman Ali, whom he said was still being greatly missed by his colleagues. Dr. Saraki said immediately Ali died, a decision was taken by the NGF to stand by his family and make moral and financial contributions to them. He explained that the donation was made by every member of the NGF (excluding Yobe State) as a token contribution to the welfare and upkeep of the family members left behind. Deputy Governor Ali, who spoke on behalf of the delegation thanked the NGF for the gesture and promised that the money would be used for the upkeep of his brother’s family. The sum of N62 million (Sixty-Two Million Naira only) represented the contribution from 31 (Thirty-One) states received to date, who each contributed N2 million to the fund. Once the balance is received from the remaining four states, their contributions would also be sent to the late Governor’s Estate.