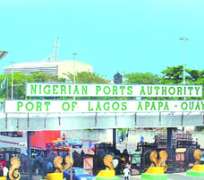 The Federal Government will spend about N3.4 billion on the removal of critical wrecks in the Lagos harbour, through the Nigerian Ports Authority (NPA), Minister of Transport, Alhaji Yusuf Suleiman, has said in Lagos, while flagging off the ceremony at the Continental Shipyard in Apapa.

He said the government is conscious of the huge resources that are being deployed for the management of the menace and the attendant loss of revenue therefrom.

Suleiman used the opportunity to express government's grave concern on the recent incident of arms seizure at the Lagos ports, imploying port operators and other relevant agencies on the need to be fully alert and conscious of the dangers of arms smuggling and the movement of dangerous cargo that may threaten both national and international security.

He told maritime egg-heads of the need for all operators and relevant agencies to see the current incident as a wake-up call for extra vigilance. The minister stated that wrecks and derelicts constitute obstacles to shipping development, adding that it was against this backdrop that a Joint Action Committee on Wrecks Removal in Nigerian Waters was constituted to ensure full compliance and implementation of the entire process of wreck removal in line with the Memorandum of Understanding (MoU) signed between NPA and the Nigerian Maritime Administration and Safety Agency.

Earlier, the chairman of the Board of Directors, NPA, Chief Tony Anenih, said that government has continued to spend substantial part of its scarce resources to improve services in the nation's maritime sector, explaining that it was imperative for key industry operators to build on the opportunities provided by the investments and the public-private model by fully committing resources for the development of the sector.

He hoped that all stakeholders and users of the channels will appreciate government's gesture of deploying enormous resources to rid the Lagos harbour of these wrecks and see the commitment as an incentive for investment.

In his own remark, the Managing Director, NPA, Malam Abdulsalam Mohammed, stated that NPA is statutorily vested with the responsibility of ensuring safety of navigation, marine environment protection, maritime security and harmonisation of port procedures in shipping and ports operations.