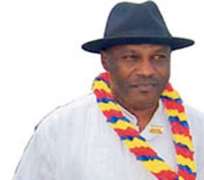 WARRI, Nov 05, (THEWILL) - Minister of Niger Delta Affairs, Elder Godsday Orubebe alongside some aides on Friday evening escaped what may have resulted into a plane crash at the Osubi Airstrip, Warri, Delta State as a chartered jet he was travelling in had an engine failure just as it touched down at the airport.

THEWILL gathered from aviation sources at the airport that the Dana chartered jet’s hydraulic system failed leaving the jet’s engine jammed in the process right on the runway.

The aircraft flew in from the nation’s capital city, Abuja. An eyewitness said that for about 30 minutes, the jet was stuck on the runway, a situation which forced an Aero Contractors plane from Lagos which was scheduled to land at about 5: PM to rove in the air for about 45 minutes. It took the combined efforts of a Shell Aviation emergency team alongside rescue personnel from the fire service to fix the aircraft, THEWILL gathered.

The problem caused a 5.pm Arik flight, which had already boarded its passengers serious delay, as it had to wait patiently for the Dana jet’s repair.