AS AKPABIO MOVES TO RESCUE EDUCATION 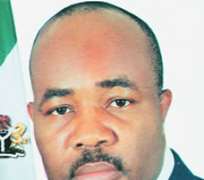 Aside from making the marks and standing out in the crowd with his unique brand of free and compulsory education policy, Akpabio, very recently made more giant strides in the area of education.

The first was the inauguration of the Governing Council of Akwa Ibom State University (AKSU) ;  the second was the release of funds for expansion of the University as well as facilitating the conversion of the Maritime Academy in Oron to the status of a Maritime University of Nigeria.

The two events happened when the Nigerian nation joined in the celebration of the World Teachers Day. Celebrating the Teachers' Day does not mean that matters relating to education have been without problems. For instance, issues of low standards, poor facilities, examination malpractices, and other forms of corruption still pervade discourse in the education sector.

Regrettably, actions and inactions of several individuals and organizations have collectively contributed to the near collapse of the indispensable sector. Still, the search for knowledge and skill acquisition have been on the increase with the establishment of several private and public universities and polytechnics in the country.

Today, the once University of Science and Technology, which existed in the 'air' has materialised into a conventional University. The governing council of the University was recently inaugurated by Chief Akpabio with a renowned don, Dr Okon Eminue of the University of Uyo as Chairman and Pro Chancellor.  The governor noted that his administration has invested about N287 million for academic manpower training of Masters and Doctorate degree holders in the 2010 academic session to form the foundation teachers of the institution.

Charging the council members, Akpabio noted that the State university must begin to do doing things differently by observing zero tolerance on corruption and earn diligence, competence and excellence as benchmarks.

Another concrete effort of the Akwa Ibom administration in facing challenges of education has been the release of N728 million for the expansion of two tertiary institutions in the State – Akwa Ibom  State University at Ikot Akpaden and the Maritime Academy at Oron. The amounts released are meant to ensure that the University pays compensation for acquired portion of 186 hectares of land to accommodate  more facilities as required by the National Universalities Commission. Part of the amount released is for the Maritime Academy at Oron to secure additional 60 hectres of land to meet conditions for its conversion into the first Maritime University in Nigeria.

In his commitment to keep faith with the dreams of the forebears of Akwa Ibom State, Akpabio has raised the stakes by applying commendable strategies to secure a viable future for his people. Speaking recently at a public function, he noted, 'we decided to move from the level of scholarship to making education free, qualitative and compulsory at the Primary through Senior secondary levels.' His government is convinced that the current efforts aimed at revamping  education, will produce generations of top players in politics, economy, education, the sciences, etc.

For Akpabio, while pessimists in government see impossibilities, he is always seeing opportunities to change the lives of the people.  Hence, he emerged in 2007 to challenge tradition and 'show our people that what we were born to see is not what we were born to be'!  The Akwa Ibom style of free and compulsory education remains exemplary. Subventions are even paid to head of schools - 300 per student, per term ( secondary); and 100 per pupil, per term ( primary). In anticipation of the influx of children into the schools, the government has built over 500 classroom blocks and renovated 1500 others. In that sector, public primary schools are beginning to look like private schools and the lines between both are becoming blurred.

Governor Akpabio ever glad to note that, 'those who thought that we would remain the house-boy and girl factory of Nigeria are at pains that the house boys and house girls are set to become the scholars and professionals…we have changed the story of the Akwa Ibom child and we have created great hope and a brighter future for the hitherto hopeless children'. Prior to 2007, educational infrastructure in Akwa Ibom was in shambles. The structures were dilapidated and the data base was as shocking as it was revealing. But in 38 months of the present administration, the face of educational has changed for good.

The administration has succeeded in abolishing all kinds of levies in primary and secondary schools. In addition, the administration has provided over three million free textbooks, science and laboratory equipment; including reagents to ensure that children undergo science practical without pains.

It has also gone far to paying examination fees for final year students, taking public examinations in the State. Courtesy of the present administration, the University of Uyo , a federal institution,  has regained accreditation in 28 courses hitherto lost while over 10 buildings have been built by the governor. In addition, othere infrastructural facilities have been upgraded , together with  the tarring of 3.5 kilometer of internal roads in the institution.