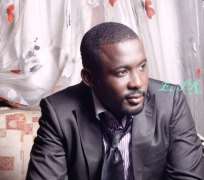 Everyone knows that in the entertainment industry worldwide, women need a bit more to glitz and glam themselves up. From hair extensions, makeup, lipstick, and more, it takes extra effort for a woman to become fabulous. However, when it comes to the beautiful men of Nigerian Entertainment, they are just born with it. From their obvious oozing appeals, to their sexy looks, these men don't need much to melt the hearts of their favorite fans.

With that being said,NFC has decided to turn the heat up as the year 2010 comes to an end, and give its viewers our picks of Top 10 sexiest men in Entertainment for the year 2010 9. Banky W
I was with some female entertainment lovers and they all simultaneously agreed that the list would be empty without including a Banky W. No he doesnt have the albs to dazzle you with, nor does he go shirtless in those photoshoots, but he still succeeds in oozing sexiness in the most unusual way. What do you expect? The man has got a soothing voice, shapeless bank account and a charming smile, why would the ladies say no? 8. Naeto C:“A smitten female fan simply described Naeto C is “painfully sexy” simply because he is sexy without even trying. Ladies, if you're looking for raw hotness with few words, Naeto is your man. The only MC with a MSC has proven that he also has sex appeal to help sell his music to make Africa's top MC's list and he is also making the Top list of entertainment men, women are lusting after”. 7. DIPP“In America and world wide, Usher Raymond is a sex god and a people pleaser. Back here in Nigeria, Dipp seems to pull off a similar effect. My friend Boma described him as “the mesmerizing eye-candy”. And if you look closely you'd realize the subtle charm that makes the ladies go gaga. 6. Mike Ezuruonye “Not even getting married could distract his teeming female fan base. One of the basic requirements of becoming a movie star isnt just the ability to interpret roles but also having charisma and finesse. Not only does Mike possess these qualities, he also has the panache to wow the screen audience with. So its going to be a sin if he didnt make the cut. 5. Jim Iyke Jim has had all the tags you can easily think of. From “nollywood bad boy” to “serial lover” etc, but the young actor turned musician has smiled to the banks courtesy of them. You may be wondering why do ladies love bad boys and i could serve you with a lengthy paradox of my opinion but that should be left for another day. Think P'ddidy and you would understand why Jim Iyke is such a big deal. The man recently announced the berth of his reality show “Jewel for Jim” that would search for the ultimate love of his life and the women have been going crazy with interest. Take it or leave it, Jim has an overdose of something that magnets the women, and that something is sexy. 4. Ikechukwu (Killz) For the lovers of albs, and six packs, Ikechukwu Onunaku is definitely the man to eye. I can still remember how Freda described him, she said and i quote “Ikechukwu looks mean, in a sexy way”. I wondered if that could be a good thing and once i asked, the ladies were all purple with blush. Every woman wants a man who looks like those models on GQ covers, they want sexy, they want perfect body even if its just a fantasy. That explains why IK is our No 4 pick 3. Ramsey Nouah The incredible thing about this man is that he goes from way back. Listen to what Nonye said “Ramsey was sexy many years ago, from over 10 years and look at him today, he is still every inch sexy”. Standing tall amidst the current influx of young sexy talented actors, this Nollywood star has held his own and proven to be a true star, stars never fade. Another classic example of men who age like fine wine (whether naturally or not, I'm not entirely sure). Sophisticated, sexy, with a voice that will melt you like silly putty, Ramsey Nouah is definitely scorching hot 2. Kenneth Okolie “Kenneth Okolie”, the girls chorused and breath a pleasant sigh. “Where has he been all our lives”, Nonye asked. I agreed with them on every reason why he should be on the No 2 spot, infact Abigail felt he should be No 1. But seriously the young man is every inch a desirable and visually enchanting male specimen. If you doubt our judgment maybe you should wonder what the Mr World jury saw too to have made him the 3rd most desirable man in the world. Who says African men dont have world appeal? Collectively we summed Kenneth up in five words, masculine, quintessentially good looking, irresistible, dangerously sexy and alluring. 1. Peter Okoye Peter is the “very noticeable” partner of the duo “Psquare”. The young man is sexy and he knows it and flaunts it whenever he can. Nonye says “He is so sexy that it hurts”. Boma agreed “It's hard not to love him, the guy is pleasing to the eyes and he makes good music too.I mean look at him! He's the kind of gorgeous that fairy tales are made of”. Need i say more?