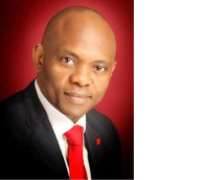 The Tony Elumelu Foundation, established by the Chairman of Heirs

Holdings, Tony Elumelu, was formally launched in Lagos, Nigeria on

Friday, October 29, 2010, to a gathering of business and political

leaders , including the former Ghanaian President Mr. John Kufuor , and

Speaking at the event, Mr. Elumelu said the establishment of the

need to address the leadership question in Africa .

'Leadership is central to both the challenges and opportunities that

Africa offers. We need to have the right leadership, in the private

and the public sectors - this Foundation's objective is to catalyse

The Foundation will focus on promoting and celebrating excellence in

business leadership and entrepreneurship across Africa. In doing this,

Mr. Elumelu said 'it will contribute to the economic transformation of

the African continent by fostering and impacting Africa's business

leaders and entrepreneurs at key stages in their development'.

institution , Elumelu has always maintained Africa at the centre of his

ambition, driven by a belief in the economic possibilities Africa

destiny - stating that nobody will develop Africa except Africans. He

reiterated that there is the need to harness the enormous resources

that abound within the African continent for its development and that

the private sector must show the way.
'We need to encourage entrepreneurship and by so doing begin to

Africa is endowed with so many resources; Africa has come of age and

has the intellectual capacity to develop itself' he stated.

The CEO of the Foundation, Dr. Wiebe Boer, who was born and raised in

Jos, Nigeria, in outlining the execution of the Founder's vision,

highlighted the two main focuses of the Foundation: business

leadership and entrepreneurship. He explained that learning from the

lessons of great historical foundations such as the Rockefeller

achieving the right balance of charity and sustainability by

sector approaches to social issues. The objective was to create an

such as Rockefeller and Carnegie.
'The Tony Elumelu Foundation will be a pioneering global foundation

where all aspects of the Foundation - from grants to impact

mission. All of this will be executed through an approach that is

transparent, accountable, results focused and based on partnerships

sector' he explained. The inaugural CEO added, 'The Tony Elumelu

Foundation will be structured as an innovative 21st century

philanthropic initiative, showing the way forward not just in Africa,

but globally, in its approach to directly and sustainably advancing

the business environment in Africa."
Boer believes that the Foundation will play an important role in this

pivotal moment in which Africa's economic transformation is becoming a

reality. 'This is the moment we want to harness to make sure the next

decades continue where this one has ended - with long term sustainable

economic growth in Africa, driven by Africa's business leaders and

entrepreneurs' he enthused.
Immediate past President of Ghana, Mr. John Kufuor, reiterated the

importance of leadership and entrepreneurship as critical factors to

the development of the African continent. While commending the efforts

of Tony Elumelu in setting up the Foundation, he called on governments

to develop the political framework that will bring the desired changes

needed on the continent.
A number of messages from friends and supporters of the Foundation

were read at the occasion, including words from the former British

School Professor Michael Porter ; and the Chairman, UBA Board of

concluded by writing, 'The Tony Elumelu Foundation will make a vital

contribution to the next stage of Africa's development, and I very

support.'  In her contribution, Mrs GraÃ§a Machel Mandela wrote, 'It is

on what to most would seem like an insurmountable challenge.  Through

this ambitious effort the African youth have gained a formidable

advocate.'
About The Tony Elumelu Foundation and its Founder

The Tony Elumelu Foundation will seek to contribute to the economic

transformation of the African continent through fostering Africa's

business and entrepreneurial leadership, emulating and replicating the

success of its Founder.

Prior to establishing the Foundation, Tony Elumelu led the United Bank

for Africa, one of Africa's leading financial services groups, through

its transformation from a single-country focused bank to a diversified

business, operating across Africa and the world. Mr Elumelu is now the

Infrastructure, Healthcare and other key sectors critical to Africa's