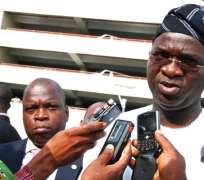 Daniel’s emergence, which had earlier been opposed by some PDP northern governors including ACN’s Edo State Governor, Adam Oshiomhole and ANPP’s Kano Governor Ibrahim Shekarau, Fashola said, raised a lot of questions on the sincerity of the PDP government towards conducting free and fair elections in the country come 2011.

He said the question of who “leads the forum must be a democratic process. It bothers me because the only single national agenda we have as a country today is free and fair elections. As I was told, only ten governors gathered to chose him (Daniel). It is burdensome that this kind of thing can happen in a party that professes to want free and fair elections.” He said the development “calls the need for internal vigilance by Nigerians on the motive of the PDP governors of the forum”, but expressed optimism that the forum would move swiftly to resolve the issue.

Erstwhile Chairman of Nigerian Governors’ Forum (NGF) and the incumbent Kwara State Governor, Dr. Bukola Saraki was ousted last Saturday by some PDP governors of the forum said to be loyal to President Goodluck Jonathan and opposed to Saraki’s presidential ambition on the PDP platform.