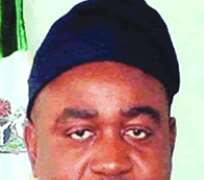 Amid the controversy trailing the election of Governor Gbenga Daniel as Chairman of the Governors Forum, since last Friday, the arrowhead of the G11 group that purportedly hatched the plot in Abuja, Governor Gabriel Suswan of Benue state has given reasons why the NGF chairman, Bukola Saraki had to go.

Making the clarification in Makurdi, the Benue State capital, against the background of the insinuation that Daniel's election was part of a ploy to put President Goodluck Jonathan's henchmen in the saddle ahead of 2011, Suswan, however said it was borne out of the need to make the Forum vibrant again.

He told newsmen that NGF members were becoming worried that the Forum had not been responding to national issues as expected. 'We need our Governors Forum because we're known to be responding to issues. There were bomb blasts in Abuja without any response from the Forum. And there are a lot of other issues that have happened in this country without responses from our Forum due to our chairman's engagement in his presidential election campaign. So, what we want is responsive leadership,' Susan explained.

Even though Suswan denied that the decision was a ploy to dethrone Governor Bukola Saraki, the Benue governor explained that the change of leadership was to allow Saraki more time to pursue his presidential ambition.

According to him, the Kwara State governor had been requested to step aside, so that he could concentrate on his political ambition.

The governor assured that the issue would be resolved today during a meeting of the Forum billed to hold in Kaduna, stressing 'if the decision of 11 out of 19 members who met and chose Governor Daniel to lead the Forum irritate other members, the meeting would enable us to resolve the matter amicably.'

Since 11 governors met at the Ogun State Governor's Lodge in Abuja, last Friday to elect Daniel to succeed his Kwara State counterpart, the governors had been singing discordant tunes. The Chairman of Northern Governors Forum, Babangida Aliyu had so far dissociated himself from the plot.

Governor Aliyu had said in Minna while declaring open the INEC Voter Education Interactive Session with traditional rulers in the North Central zone that the Northern Governors' Forum dissociated itself from the recent election of Governor Daniel, as the chairman of Governors' Forum.

But in a swift reaction, Governor Ibrahim Idris of Kogi State faulted a statement credited to the Chairman of the Northern Governors Forum, Alhaji Muazu Babangida Aliyu, disowning Daniel.

In an exclusive interview with Daily Sun yesterday in Lokoja, the Kogi State capital Governor Idris said although the Forum was yet to elect its Chairman, there was no big deal about the crisis in the Forum.

Idris, a member of the Northern Governors' Forum expressed surprise at the statement of the NGF chairman, saying 'Governor Babangida Aliyu is only saying his own mind. There was no where we sat down to discuss the issue.

'But we are going to have our meeting in two days time. This issue has not been discussed yet. So we have not discussed anybody being the chairman of the forum. Aliyu is just saying his own mind. That's the way I see the whole thing.

'We have not discussed anything whether it is Daniel or James or John that is going to be the chairman. I don't know where you (journalists) got your information from. As far I am concerned, there is nothing wrong with the forum. We are still intact. It is when we reach the meeting that we can discuss who is going to be our chairman.

Asked if an election actually took place, Idris retorted ''I am not going to answer any question over the issue again. I have told you Babangida Aliyu was only expressing his mind and not the mind of Northern governors.''

The governor, however, said contrary to reports there was no confusion whatsoever in the Governors' Forum and that until they hold their meeting, 'nobody has anything to say.''

Fashola who spoke with journalists in Lagos on Tuesday said the development is worrisome, noting that act of the 11- man caucus of the Peoples Democratic Party (PDP) governors in the Forum that appointed Daniel ordinarily usurped and subverted the will of 36 members of the Forum.

The governor said the appointment made possible by minority,  further raises questions of sincerity of purpose on the part of the ruling PDP government towards conducting free and fair elections in the country in 2011.

'The question of who leads the Forum must be a democratic process. It bothers me because the only single national agenda we have as a country today is free and fair elections.

'As I was told, only ten governors gathered to choose him (Daniel). It is burdensome that this kind of thing can happen in a party that professes to want free and fair elections, ' he said.

Fashola remarked that the development has given credence to the need for internal vigilance by Nigerians on the motive of the PDP governors in the Forum, expressing optimism that the forum would move swiftly to resolve the issue.

It would be recalled that erstwhile Chairman of NGF and Kwara State Governor, Dr. Bukola Saraki was ousted last Friday by some PDP governors said to be loyal to President Goodluck Jonathan and opposed to Saraki's presidential ambition on the PDP platform.

Daniel's emergence had also been opposed by some of the PDP northern governors and Action Congress of Nigeria (ACN) Governor, Adam Oshiomhole of Edo State.