CONCERNING ARMS SEIZURE AT THE PORTS 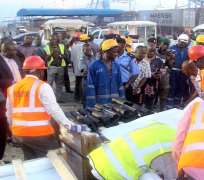 The enthusiasm of those who have been commending the national security agencies for discovering 13 containers of lethal weapons at the Apapa port this week is I think, somewhat misplaced. Nor should anyone be unduly impressed by the claim by the Comptroller General of Customs that the discovery was made possible by the use of sophisticated equipment by Customs officials. The incident should compel a re-assessment once more of the country’s security status and the challenge of human security. We may never know everything that has transpired in this particular case, for perhaps security reasons, but there is on the basis of what is known so far, enough cause for alarm. Nigeria now part of the Hamas arms and ammunition route? War-grade weapons in large quantities at a Nigerian port? The response of the various agencies to the discovery has been praised by some commentators I suppose out of excitement that some effort is being made to check the proliferation of illegal weapons through Nigerian borders, but there are questions that are not being addressed.

Various security chiefs trooped to the port to examine the arms cache which includes rockets, mortars, grenades, explosives, but rather than this leading to necessary inter-agency collaboration and the formulation of appropriate responses, it has been reported that there has been a display of rivalry between the State Security Services and the Customs over which of the two organizations should take the credit for the disclosure. This rivalry if it truly exists is needless; the leadership of the two organizations should nip it in the bud right away. The key issue is not who discovered the deadly weapons packaged as building materials, but what can be done in the long term to discourage the use of Nigeria as a route for all kinds of deadly cargo, including toxic materials.

The frequency with which “suspicious materials” are now being reported along Nigerian routes and in many of our cities is frightening. In the last month alone, there was a bomb blast in Abuja, the interception of a trailer load of arms and ammunition in Anambra state, and the arrest of an arms-bearing vessel in Onne Port, Rivers state- and these are only the reported cases. Given Nigeria’s weak national security architecture, the situation could be worse and the evidence is writ large in the spread of criminality and violence in the country and the seeming ineffectiveness of the concerned state agencies.

Granted that the administration has often tried to address the challenge but what is exposed in every instance is the absence of a well thought-out and well-managed national security framework; unfortunately security is one of the original concerns of government, and where this fails, there are serious implications for national stability. One major area of weakness is the tendency to assume, incorrectly, that all that is required is personnel changes whereas what may be advisable is a wide-ranging audit of capacity, infrastructure and personnel in an integrated sense, in addition to quality investment in the security services and an enhancement of human security through pro-people domestic policy. In the absence of such strategic response, every security challenge shows the agencies merely trying to grab the headlines and claim little victories or they respond excitedly to episodic achievements, made possible by ad-hoc measures or sheer serendipity.

In the Apapa port case under review, it has been made clear that the arms cargo arrived at the port in July. Customs officials claim that they noticed certain irregularities in the documentation of the cargo and hence they kept all the containers under surveillance. They did that for three months? If indeed they had such sophisticated equipment as claimed, why was the discovery and the exposure not made immediately? And why did they and the SSS have to announce the discovery first, and make a big show of it in the media, before going around to arrest suspects, long after the main culprits could have escaped? And if it is true that the containers had already been cleared for shipment to the Gambia, before the Customs department struck, then who gave the clearance and why, given the claim about surveillance?

President Goodluck Jonathan has reportedly praised the Customs for their vigilance. I doubt if the praise is well-deserved. What has happened is enough for the President to order a full-scale investigation of the processes not just at the Apapa port but at all the ports in the country, and the borders as well. Nigeria has become a dumping ground for all kinds of imports and a smuggler’s preferred route largely because of the failure of our intelligence and security machinery, and the inefficiency at our ports. Ironically, Nigeria is not just a signatory to international conventions on the proliferation of small and light weapons, it is one of the major promoters of the initiative in the West African sub-region. Whereas our neighbours have shown better resolve in promoting human security, Nigeria has been negligent despite the existence of multiple agencies including Task Forces. This is an area of failure that requires much closer attention and pro-active response. Our ports need to be upgraded. Things are not only slow at Nigerian ports, they are known to be centres of grand and organized corruption, made possible largely by official collusion. Those ports need to be cleansed and the best approach will require inter-agency co-operation. In the present case, what happened to pre-shipment inspection? Deadly weapons passed off as building materials? By now, the Nigerian authorities should be demanding explanations from the originating country and port. The Jerusalem Post, an Israeli newspaper is already branding Nigeria as part of the Hamas axis: it is a label that Nigeria must reject by stepping up the effectiveness of its ports security. This then is not just about going to a Lagos neighbourhood to arrest some junior Iranian factory workers; it requires very serious investigation to uncover the network of saboteurs who consider Nigeria an easy destination for deadly cargo.

And there are lessons to be learnt from other jurisdictions. This week alone, the Americans stopped US-bound “suspicious packages” in the United Kingdom and the United Arab Emirates. The answer lies in pro-activeness and international co-operation and seriousness on the part of local authorities.

The Comptroller General of Customs has seized upon the drama of media attention in the latest case to boast about how his department “is fully ready and fortified to burst importation of illegal cargo into the country?” Is his department really “fully ready”? Should he not use this moment as an opportunity to make a case for the upgrading of the Customs? Should this not be an opportunity for an exposure of the limitations of the Ports Authority? There are too many cargoes lying around at the ports, and it is not impossible that many more contain illicit cargo. The Customs spokesman has claimed that the documentation for the containers was suspicious, but it is of course standard practice that the documentation for goods passing through Nigerian ports and borders are rarely reliable. This is made possible by government officials themselves, for a fee. It is perhaps this web of collusion that failed in some of the instances where the agencies are claiming efficiency! This should be investigated and if any form of collusion can be established at any level, appropriate sanctions should be applied.

All of this is tied to human security. What if the arms and ammunition were meant for use inside Nigeria? What if such cargo already exists within the country? The on-going trial of Henry Okah of the Movement for the Emancipation of the Niger Delta (MEND) has shown frighteningly, that Hamas or no Hamas, a thriving trade in arms and ammunition already exists in the country. The threat that this poses to national security is a comment on the capability of the security and intelligence agencies, and the cost is evident in the crisis in the Niger Delta, in the violence in Jos, in the activities of the Boko Haram, and the general wave of insecurity in the land. All of a sudden, Nigeria has become a country where bomb explosions, rockets, grenades, chemical weapons have crept into daily discourse. Even in the best organized countries of the world, leakages and failures occur, but in such countries, there is an organized attempt to provide security, to check crime and impunity and to strengthen institutions. These are the issues that regular reports of illegal weapons within our borders should highlight.

As at the time of this writing, the authorities had promised that the thirteenth deadly container will be opened and a full report of the contents of the dangerous containers will be given. This should be only the first step. Both the Task Force on illegal weapons and all the other security agencies must raise their level of performance. Periodic exertions and outburst of enthusiasm may impress political figures, but the main job to be done is not in the media, but on the field. There seems to be a pattern, it seems to the discovery of dangerous weapons such as this. It happens every election season. And it is partly why we approach every election in the context of fear and uncertainty. One Customs chief once lamented that there are too many illegal arms and ammunitions in circulation in Nigeria. Another official disclosed that the so-called high and mighty are often involved. We also have an idea of the extent of corruption at the ports with the incarceration of some former Ports Authority Chiefs who contrary to all expectations of Presidential pardon, appear to have settled down to prison life!

The thing to do is to ensure that the country’s security agencies are more professional and efficient; their seemingly episodic vigilance is unhelpful. Those who seek to rule Nigeria in 2011 may be more relevant if they take on this subject of national and human security as a necessary campaign issue and attempt to provide action plans and the required commitment, to address it, and to ensure that no one takes advantage of Nigeria’s weakness. Everything else, including national image and integrity, is tied to this all-important subject. An Advisory For The EFCC (2)

Mrs. Farida Waziri, the EFCC Chair, has put up a spirited defence of her agency with regard to reports that an advisory list on the eligibility of certain potential candidates in the 2011 general elections actually originated therefrom. Her explanations are noteworthy and well-taken, including her declaration that she has a Master’s degree in Law (Hey, Congratulations, Madam!). It is just as well, however, that the EFCC by implication has reassured us that it has no intention of getting involved in political or constitutional matters and that Mrs. Waziri is concerned that Nigeria has dropped in the Transparency International corruption index ratings. She complains about political mischief! There are lessons that she may learn from this episode before we draw a curtain on it. Both she and the agency should pay more careful attention to public communication, and resist the temptation to send wrong and conflicting signals. The war against corruption is as much about perception as it is about actual performance.