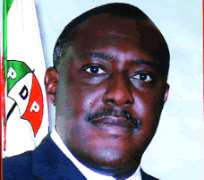 Olisa
Barrister Olisa Metuh is the Peoples Democratic Party, [PDP] National Vice Chairman, South-East. His executive has been engaged in trouble-shooting mission in the zone and of recent in the conduct of fresh congress in Anambra State.

Metuh acknowledged that there is internal crisis in the party, but disclosed that the zonal executive and the PDP National Working Committee (NWC) have been making spirited efforts to restore peace in the party, ahead of 2011 election. He points fingers of scorn in the direction of the former president, Chief Olusegun Obasanjo and former Chairman of the PDP Board of Trustees, (BoT), Chief Tony Anenih for conceding leadership of the state chapters to the PDP Governors.

Metuh admonished party gladiators to allow for the separation of government from the party for internal democracy to thrive.

'Internal democracy must succeed, for PDP to grow. I get scared sometimes when I think of the fact that, if we don't manage our party very well, some day we might be in opposition…'

He spoke with Daily Sun.
Excerpts:
What is being done to restore amity in the PDP in the South- East?

No, it would be wrong to say we are polarized. You can only say that in one or two states, we have a problem.

In Anambra, we have a problem, where a few disgruntled people actually want to polarise the party and they want to make sure that the party doesn't succeed and we are battling it right now. We are truly refocusing  the party in Anambra, we are giving it a new direction and in the next one or two weeks, PDP Anambra would be on a sound footing.

We are weeding out the bad elements, we have engaged them directly.

For the first time in the history of Anambra State, we have engaged the people who are the troublemakers, the promoters of this division and the polarization and we are winning the battle by the grace of God.

In Abia State, we have no problem. We are completely PDP, every single person is with the governor and we are like that in most other states, except in Anambra and may be one or two.. like in every other zone.

You just said there is no crisis in Abia, but a faction is in court; in Imo, the likes of Ararume, Achike Udenwa are alleging marginalization by Ikedi Ohakim, the governor

No, in Abia, let us be factual - there is no known stakeholder in Abia PDP that is in court. There is somebody I heard is in court, a former youth leader and I don't know why he is doing it, may be for popularity sake.

There is no known stakeholder, whether in House of Assembly, or House of Representatives, or BoT member. The entire people in Abia are behind Governor Orji.

But Imo is heavily polarized: the governor is battling for control of the party with Udenwa, Ararume…

What is happening in Imo, I find very amusing. A group of people came together and they say the governor of Imo isn't popular and cannot win an election.

That means you are being economical with the truth. You don't come and tell us things that we believe what is happening in Imo. I come from Anambra next door and I know what is the truth.

So, if you believe that the governor isn't popular, go and test yourself and stop disturbing us from conducting congress let the congress hold and let us see that you are popular. You can tell us that you would win the election, first come and win congress.

We would have a free and fair congress, then we would know you are popular.

The governors wants a free and fair congress, the other side said they don't want, then they can not say that the governor isn't popular. I don't agree. It is the person who is running away from congress that isn't popular, not the one itching for congress. I think that the governor of Imo State is grossly underestimated, either by the party, or otherwise, because I had visited the state and I am of the  opinion that he has done well, in spite of the numerous court orders and attempts to divert his attention and to  make him deviate from his own agenda for the people of Imo State.

Is Enugu PDP crisis-free?
Well, in terms of administration, we have peace. In terms of party, we have witnessed relative peace, but there are some people who want some adjustment in the party. It is being handled at the national level and very soon, we would have complete peace in Enugu. We don't have it yet now; there is some grumblings but it is being attended to by the national body. That's the truth.

One thing I have noticed in states where there are crises; it isn't peculiar to South-East -the governors don't want to let go their grip on the party structureS and other stalwarts insist that there must be separation of party from government.

Well, it boils down to what Tony Anenih did in 2001. Blame it on Anenih. In 1999, we had complete democracy in PDP and Nigeria. The democracy was working out well then, by 2001, Anenih felt the only way the president could go for second tenure was to give party control to the governors and he called the governors and told the president to change the party national executive.

The governors didn't own it. We had a party in Anambra separated from the governors, until they changed it and gave the party structure to the governors and once you gave it to them, it isn't easy to remove it from them.

As far as I am concerned, the party isn't yet doing that in many states. Even at the national level we need to work harder, not being the appendage of the Executive; we should be controlling the Executive, not the other way round.  But in the past, I have seen where, especially last year where matters pertaining to the NEC and the NWC people would want to know the position of the President, I don't think so. I think the party should take a position and advise the president on the best one for the party and the President would key in, because when it comes to governance, he doesn't consult us.

That's the way I see it. For us to move forward in this country, we must separate government from the party. Party managers should be able to manage the party and the governors manage governance of their states.

Nwodo assured party faithful of reforms, but along the line, it appears expediency has taken over his promise of restoration of normative values. The governors' romance with President Jonathan who is eyeing the PDP Presidential ticket has made the PDP NWC to abandon reform.  What is your take on this?

Well, I would have said that I am not going to comment, but I would tell you the truth. One man cannot change the whole world. Nwodo came to do reform, but he came into a system, the system has been set and that's the truth. A system has been set in their ways and he came in with new ideas on reformation and it will take a longer time to do that. It isn't something that you can switch on like a switch: one and off.

It is something that take a gradual process to do and the time is too short. That's why it has not been noticeable, the changes that he has been planning to implement. That's the truth of the matter.

But disenchanted members are no longer patient; they are contemplating leaving the party: in Enugu, Chimaroke has left; in Kano, Mohammed Abacha has defected to CPC; in Oyo, some are complaining that the PDP NWC is paying lip service to reform and they are  planning to move to CAN…

Internal democracy must succeed, for PDP to grow. I get scared sometimes when I think of the fact that, if we don't manage our party very well, some day we might be in opposition.

We need to manage the affairs of this party very well. But I will give the NWC very high marks, because they have been able to control the two sides: check the perceived excesses of the governors and restore the confidence of the ordinary people in the party.