WHY WE FLOATED SSEM, BY EMEKA OBASI 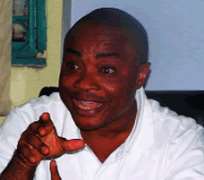 Emeka Obasi i
Objectives of the SSEM
We want to draw public awareness to the crisis ravaging the South-East. Curiously, there is a seeming palpable ignorance among the members of the public, and the government on the exact nature of the crises of the South-East.

This problem has manifested in recent times in terms of kidnapping and general insecurity. So, there is a tendency by many people including the government to see the South-East problem from the prism of security, knowing fully well that that it is not so. We decided to set up the Save South East Movement as a way of creating public awareness on these problems.

Issues
The issue is that the South-East is the poorest part of Nigeria. It is the only zone in Nigeria that is regressing, where much value is not being added, where there isn't productivity. Where you do not have industrialization of any sort. So, the people have resorted to survival by whatever means.

The five States in the South East do not generate in a year what Lagos State government generates in a month. The five states if you consolidate their internally generated revenue, it is far less than what Lagos state government generates. IGR is an indicator of the level of commercial and economic activities in a zone. So, what it says is that there isn't much economic and commercial activity going on in the South-East. What you see is peasantry, trading and peasant farming.

Ostensibly, it is self-inflicted. But as I said during our summit, the problems of the South East are two. Really two plunged-one is what Nigeria did to the South-East and second is what the South-East is doing to itself.

Now ,government is the biggest is the biggest actor in any economy. In economics we say government functions in an external level. We say it is externality. It is the government that drives the locomotive of economic development. At a time in Nigeria when government was the principal investor in industrialization, it did not locate industries in the South-East .

At the end of the war in 1970, General Gowon launched an ambitious programme called the 3Rs-Rehabilitation, Reconstruction, Reconciliation. Only the reconciliation aspect succeeded. There was hardly any reconstruction. There was hardly any rehabilitation. At a time the government was building industries all over the country, it did not build in the South-East.

Which is why there was a time the phrase 'marginalization' was very much in use. That the South-East was being marginalized. The Federal government did not site industries in the then South-East. And so, because of that, the South-East economy did not develop. What happened that peasantry took place, and South Easterners had to migrate to other parents of the country in order to earn a living. Right now, it is difficult for any average South Easterner to live there and earn a decent living.

The most successful Igbo are those who live outside Igbo land. Because Igbo land does not offer enough nourishment for people to survive there. So, they migrate. Igbo are the most migrant population in Nigeria. What explains that? Because where they are coming from , there isn't enough engagement for them.

Somebody said that the five per cent of every indigenous population is made up of the Igbo. In Lagos , about 40 to 48 per cent of the population are Igbo, which creates another problem.

And that problem is a potential rift. A potential conflict between the settlers here and the indigenes. The lesson of history is that any time the population of settlers begins to threaten that of the indigenes there is often a conflict. Historically it has never failed. If you remember the saying a Pharaoh who did not know Joseph came on the throne, it is because the population of the Israelis started growing and so there was a conflict between the Israelis and the Egyptians.

So, any perceptive student of history will tell you that there is a feeling of unease. So, I am telling you this. I am saying it loud and clear. Among many Igbo who live in Lagos, there is a feeling of uneasiness about the future of the Igbo in Lagos. We are first generation Igbo settling in Lagos so to say. I have a home in Umuahia, I go to. But my son has only been to Umuahia twice, and my son will be ten years on January 1. His own life is going to be conditioned in Lagos. And then my son is never going to be called a Lagosian , because of his surname. What about his future?

In literature, in African American literature we call it rootlessness. The theme of rootlessness is the core of the African- American crisis both in Caribbean, and in Latin America and the North America. So, the Igbo are going to have a generation of indigenes who do not have a root, because they have been cut out from their original roots. And they cannot be indigenes of where they live in; so, they are going to be rootless, which will have severe implications-socio-economic and even political implications. People are not thinking about that.

Let me also talk of what the Igbo are doing to themselves. Igbos have had very irresponsible leadership since 1999 when Obasanjo came to power. I call it the lost decade. Because we flaunted the numbers here, and we discovered that about 3 trillion naira has flown into the South-East from the federal government since 1999. If you factor in, statutory allocation to state government , statutory allocations to local government and petroleum windfall and all that.

You go round the South East, you cannot see where that money was spent. Mbakwe was governor of old Imo State and practically everything that was built was done by Mbakwe with meager resources. Even to he leveraged money, that is to say he borrowed money offshore, and you can still see what he used that money to do. He built Concorde Hotel, the major hotel in Imo State, which has been hopelessly run down. He built Avutu poultry. He refurbished the Golden Guinea Brewery in Umuahia. The modern ceramic industry in Umuahia. He launched an ambitious urban renewal projects. He built Aba township roads, Umuahia township roads and Owerri township roads.

Mbakwe realized that it was important to live in the East and earn a meaningful living. Now fast forward, from 1999 to 2007 there was nothing built. So, you have a problem where Igbo governors have not understood exactly the peculiar situation of their people and try to act.

The way forward
We want to get government to be aware of this. First, you create awareness. the ordinary person has to understand that the problem in the South East is not just a law and order problem. It is not just a question of security. It is also a question of lack of economic opportunities and empowerment. And there fore , we have to get the government to understand that and appropriate funds to develop the South-East. They have to be a deliberate policy of industrialization. The kind of policy we have towards the Niger Delta.

I tell people , Ikeja local government is bigger economically than the whole south East. That is the truth. Ikeja local government has Cadbury, Guinness, Coca-cola, 7up ,and so many other industries. The whole South East has only one industry that can compete with Guinness , that is Nigeria Brewery in Enugu. There is nothing going in the place. What do people do? This does not justify kidnapping or criminality. But it explains it. The devil finds work for the ideal mind.