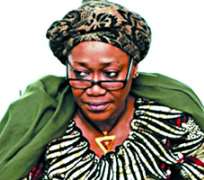 Waziri
It all started with a purported advisory list forwarded by the Economic and Financial Crimes Commission (EFCC) to political parties. That was quickly followed by a rash of reactions that has since kicked up a storm in the polity.

Was there truly an advisory list or were some people trying to set the political space on fire just to see if their lighters work? Facts have emerged that there is a gang-up to frustrate the intention of the anti-graft body. A presidency source who confided in Sunday Sun said the gang-up is anchored by a top dog in government who cuts deals with politicians with high profile cases with the EFCC.

According to him, President Goodluck Jonathan is already aware of the activities of the government official and pointedly told the EFCC boss, Mrs Farida Waziri, on Tuesday, to carry out her job without fear of intimidation from any quarters.

Our source likened the government official to a former Attorney General and Minister of Justice, saying that he ( the official) has so far facilitated the withdrawal of about 15 high profile cases that the anti-crime agency is pursuing in various courts.

'He cuts deals with those who have high profile cases with the EFCC and writes a long-winding memo justifying why such cases should be withdrawn', he said. It was gathered that most politicians and other suspects who have cases hanging on their necks now know the disposition of the official and lay siege to his residence so he can 'help' them escape justice from the EFCC.

Some of the cases alleged to have been affected by the activities of the said government official, the source said, included the Vaswani brothers, former Comptroller General of Nigerian Customs Service, Nigerian Electricity Regulatory Commission (NERC), among others. 'The presidency is fully aware of the brewing storm and has told Mrs Waziri not to be intimidated but should go on and do her job. He even told Madam Chairman that the top official does not have the Presidency's brief to warn her.'

However, the top dog involved in this stop-the-court racket is not relenting as he is believed to be too far gone in his 'deals' with those who have cases to answer with the EFCC, to turn back now. Sunday Sun also gathered that the same top government official facilitated the return of the former Managing Director of Intercontinental Bank, Mr Erastus Akingbola who took off in the wake of arrests of bank CEOs whose banks were found wanting by the CBN banking reforms.

According to the Presidency source, Akingbola who was put on the watchlist of security agencies flew direct to Abuja, the federal capital because of the deal he allegedly cut with the top dog. The source explained that anybody on such a watch list is arrested and handed over to the agency that watch-listed him whenever he gets to an entry point of affected countries. According to him, the Akingbola case is currently being stalled because of interference from the official who has become a thorn in the flesh of the anti-graft agency. He recalled that some weeks ago, while Mrs Waziri was abroad, a story was allegedly planted in the media that the former governor of Bauchi State, Alhaji Adamu Mu'azu, had been cleared by the commission.

The following day, the EFCC denied the story , saying the commission could not have cleared Mu'azu considering that the former governor was outside the country and had yet to report officially to the agency since he left office in 2007.

Sunday Sun also learnt that there is an existing white paper indicting Mu'azu adding that too much money 'got missing' under the former governor's watch.

'We cannot go on like this. We must at the very least attempt to clean this Augean stable. If people who have been accused of wrong doing are more interested in stalling court proceeding than clearing their names, the EFCC owes the nation a duty to alert the political parties of the legal implications of fielding candidates with pending court cases.

'It is true the Commission cannot disqualify anybody and that is why whatever anybody gets from the agency's website cannot be called an advisory list. There is a job to be done by EFCC and that is what it is doing.', he said.

It would be recalled that after the publication of the touted advisory list, the Attorney-General of the Federation (AGF) and Minister of Justice, Mohammed Bello Adoke (SAN), warned the EFCC to 'desist from making statements capable of heating up the polity'.

At least 40 prominent politicians are on the list containing over 100 persons with high profile cases whom the anti-graft body advised should be barred from seeking election into public offices. Adoke in a letter to Waziri dated Sunday, October 24 had asked the EFCC chairman to stop making statements capable of embarrassing the Federal Government.

The AGF advised all agencies of the Federal Government including the EFCC to stay within what he called their mandates and avoid issues that were likely to project the government in bad light. He said the grounds for disqualification of candidates for political offices and those empowered to exercise the power to disqualify candidates were clearly stated in the Electoral Act, 2010. But he commended Waziri for making great strides in the fight against corruption even as he warned her to avoid statements that could cause apprehension in the minds of the people.

In the letter with reference number HAGF/EFCC/2010/ Vol. 1/10) entitled 'Re: Incessant Political Statements Capable of Embarrassing the Federal Government of Nigeria and Unduly Heating up the Polity,' the AGF said: 'My attention has been drawn to recent disturbing reports of political statements credited to the leadership of the Economic and Financial Crimes Commission which are capable of embarrassing the government and unduly heating up the polity. The recent comments credited to the chairman of the EFCC which was widely reported in the print and electronic media, to the effect that the commission had compiled names of people under investigation for the purposes of sensitizing political parties to exclude such persons from the political process is a case in point.

'As we approach the 2010 General Elections, I wish to advise that all agencies of government must moderate their public utterances and refrain from making statements likely to cause apprehension in the minds of the public that this administration is taking measures aimed at excluding some people or its perceived political opponents from the political process. While it is important for anti-corruption agencies to continue to pursue their statutory mandate with vigour, care must be taken to ensure that no negative feeling or perception is unwittingly created that government is complicit in any grand design or scheme to 'witch-hunt' people.