HAMMERS NOT AFRAID OF GUNNERS – UPSON 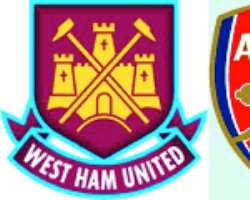 Matthew Upson is refusing to hit the panic button after West Ham failed to move off the foot of the table. The team is also not afraid to confront giant killers, Arsenal in today's duel in England.

The Hammers were beaten 2-1 by Newcastle last weekend and are now three points adrift of safety, having suffered their first loss since September 11.

But Upson, who was a member of England's World Cup squad, feels the East London team is in a false position.

'We're not hitting the panic button,” said Upson.
'People can get carried away with our performances and our position but before this game we went on a five-match

unbeaten run. We weren't on a drastically bad run.
'We just need to turn a few draws into wins.'
The final whistle triggered a chorus of boos as the West Ham fans starting calling for the head of Avram Grant.

'We want to give our supporters something that is worth turning up for and maybe in the second half we didn't achieve that.

'We looked dangerous in the first half but we just fell away. We have to analyse that and find out why.'

And despite having to travel to Emirates Stadium to face Arsenal next week, he remains optimistic.

'There are no easy games in football and away games are tough, but anything can happen,' said Grant.

'Maybe Arsenal away will be the toughest game of the season but we will try to do our best there.'

West Ham has the unwanted record of having the worst goal difference in the division, having only scored five times this season.

But with Carlton Cole returning to goalscoring form in what was his first start in a month, Upson is confident he can fire them to safety.

'When Carlton's fit and playing he's a great asset for us,' continued Upson.

'With him back playing and fit it gives a good selection of strikers, that's important for us because I don't think

we've scored more than one goal in a game in the league. We need to increase that ratio.'

Meanwhile, Upson should be fit to face his former side Arsenal at the weekend after revealing he was replaced against Newcastle last Saturday only as a precaution.