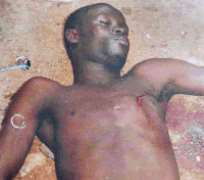 Victim
If tears could raise the dead, Hafeez Rasheed, allegedly stabbed to death by his wife, Molayo, would have 'resurrected' by now. But wishes were not horses, as her weeping and wailing could not repair the irreparable damage, done to the family by his alleged murder. But the woman in the eyes of the storm tried to justify her action.

'After stabbing him, I cried out for help, but our neighbours did not come to assist in saving his life. I cried for help but nobody came to assist me,' she lamented. The incident occurred at Ile Oloola Oja Igbo area of Ibadan, Oyo State. Problem started when Molayo was eating a loaf of bread and her husband decided to take part of it without her permission.

The 18-year-old woman was said to have challenged her husband for eating out of it. The suspect, a bread hawker, was alleged to have earlier quarreled with the victim, after he reportedly refused to give her N1,000, feeding allowance.

According to her, what her late husband could afford to give her was N70. She also narrated how they started fighting as a result of his failure to give her the money she requested.

'I was frustrated as he could only afford to give me N70, instead of the N1,000. We started exchanging words and he suddenly held my back. As I tried to lose myself from his grip, he started beating me up. Fight later broke out and it was in the process that I used the knife to stab him in the chest and he died at about 2.00 pm.

I didn't know it would result in his death. I still blame our neighbours for not coming to his rescue,' she said amid tears. According to some neighbours, before the tragedy, the couple turned their matrimonial home to battle field.

The suspect also confirmed this: 'We fought regularly and after each quarrel, which sometimes made me to go back to my parents' house, my husband usually came to beg me to come back,' she said.

'I got married to my husband in 2007 and the marriage is blessed with a year old child. But my husband was not taking care of me and our child. He usually beat me up each time I requested money for the up-keep of the family,' Molayo said. One of the victim's relatives said the family was still in shock over the tragedy. He disclosed that Rasheed was the only son of his parents.

'They always quarreled, but we didn't know this could result in his death,' he said. He recalled how the suspect was sent packing on many occasions, but her late husband went and brought her back to the family. 'Let Molayo face the consequences of her dastardly act,' he said.

The second-in-command at the State Criminal Investigation Department (SCID), Iyaganku, Ibadan, Mr. Okpara Benjamin, confirmed the incident. He disclosed that that the corpse had been deposited at General Hospital, Yemetu, Ibadan, adding that the suspect would be prosecuted after investigation.