Why Guber Poll Petition Will Terminate At Supreme Court - Senate 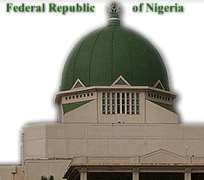 ABUJA, Oct 26, (THEWILL) - The Senate today said the new constitutional arrangement that pushes petitions arising from the governorship election from the lower court to the Supreme Court is to enrich jurisprudence and avoid the conflicting judgment from courts of coordinate jurisdiction.

Also the Senate will on Wednesday consider and vote on the report of its Committee on Constitution Review that fine-tuned the Constitution (2nd Alteration) Bill, 2010.

Senate spokesman, Senator Ayogu Eze who advanced the reasons said; "one of the reasons was because we looked at conflicting judgments that came from various divisions of the courts of appeal in the country. In some cases that were treated and based on our discussions with some judges, they said that they have difficulties relying on authorities arising from these appellate courts because one authority can issue from a division in Enugu and another authority will issue from a division in Kaduna on the same case, but reaching different conclusion. So we wanted a situation where the Supreme Court will be the final determinant.”

However, Deputy Senate President announced that the Senate would vote on the two sections just before Ekweremadu, who is also the Chairman of the 44-member committee, urged all senators to endeavour to attend Wednesday's crucial sitting at the end of which the second alteration to the Constitution may be formally effected by the Senate.

The Bill seeks to set new time-lines for the conduct of future national elections by the Independent National Electoral commission (INEC) and to streamline the process of adjudication of election petitions.

The committee's report was presented last Thursday but could not be considered as earlier indicated.

In the report, the Committee had recommended a three-stage judicial process for litigation arising from governorship election, starting from the election petition tribunal and terminating at the Supreme Court.

Before now, governorship election petitions used to terminate at the Court of Appeal.Section 233 (2) of the recommended amendment states that "An appeal shall lie from decisions of the Court of Appeal to the Supreme Court as of right in the... decision on whether any person has been validly elected to the office of Governor or deputy Governor under this constitution".

The committee also recommended that "an appeal from a decision of an election tribunal or Court of Appeal in an election matter shall be heard and disposed of within 60 days from the date of the delivery of judgment of the tribunal or court".

The explanatory note of the committee's report said this provision is inserted to enable the Supreme Court deliver judgment on governorship election petition appeal within 60 days.

Briefing journalists at the end of plenary, Senate spokesman, Senator Ayogu Eze expressed the hope that Speakers of the various Houses of Assembly will also expedite action on the constitution amendment when it is transmitted to them "so that the actual process of preparations for the 2011 elections can begin in earnest".

He said: "INEC should be able to be do quite a lot now, procuring their machines, getting set to do their registrations and doing all that is needful for the exercise", adding that, "this window that INEC has been offered should be used maximally for the benefit of ensuring that we have the structure on ground to do the elections that we all desire, free, fair and credible elections."

Eze then assured that "on the part of the Senate, we are very, very committed that we are moving ahead to ensure that whatever needs to be done is done".