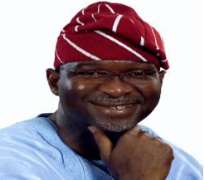 The Vice Chancellor of the Lagos State, Lateef Hussein is currently battling between the devil and the deep blue sea, and if information reaching Huhuonline.com are anything to go by, he might be eased of his position any moment from now. Aggrieved lecturers of the institution who could no longer bear the daily torture they face as a result of his alleged high handedness spilled the bean this evening at the Lagos State House of Assembly to the amazement of the legislators present at the day's sitting.

Among allegations leveled against him are that he misappropriated several billions of naira given by the State as subvention to the institution between 2005 and now.

He was also accused of appointing his cronies most of whom have long retired from acting service and imposing contract staff as heads of departments and faculties.

Despite the efforts of the State government. Regarding the school, the institution does not have any dedicated library or laboratory. It has also not had any physical structure since the VC assumed office.

As a result of his dictatorial tendencies, LASU, once regarded as one of the best institutions in the country in terms of Law and other courses in the institution now has 10 courses denied accreditation by the National Universities Commission.

The NUC, the lecturers claimed would be visiting the school in November this year for another round of denial of accreditation of another 26 courses.

They accused Hussein of hounding several lecturers in the school making them run for their dear lives.

Chairman of the institution's branch of the  Academic Staff Union of Universities, Dr. Kabir Akinyemi, also accused the Vice Chancellor of sitting on the promotion of the lecturers since 2005.

As at when he became the VC,the institution was said to have about six professors in the faculty of Law, but this is no longer the case as the only one currently remaining, Prof. Olusegun Yerokun, is a retired lecturer who is also on contract and now heads the faculty as the dean.

The institution's Director of Academic Planning is manned by one Mr. Olanrewaju John, who was appointed and made a level 14 staff with just a Bachelor of Art(BA) and barely six years experience for a job that should be handled by a Professor.

Though, they did not mention the courses that may face accreditation problems next month, it was learnt that the College of Medicine might be affected as the institution also makes use of contract staff.

When asked to defend himself, the VC who was shaking and stuttering, blamed the entire situation on the school's senate, which he has allegedly pocketed and has continued to influence.

While accusing the Vice Chancellor of not been able to handle the institution, the lawmakers reminded him that apart from the N17 billion granted the institution by the state government, the government had not reneged in its commitment to the school.

They therefore resolved to hire the services of a competent accounting firm to probe the administration's spending so far, while the House decides on what action to take.

The Speaker, Adeyemi Ikuforiji, also stated that they would not be influenced by anybody in the course of investigating the issue as the House had severally warned the Vice Chancellor to desist from ruining the school aground.

Investigations revealed that Prof. Hussein would have been sacked before now, but for the constant intervention of the former Governor of State, Asiwaju Bola Tinubu, who was said to have appointed him.