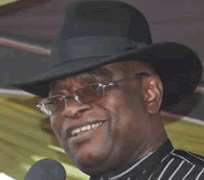 Okon
The vice chairman of Arik Air and member of President Goodluck Jonathan campaign organisation, Senator Anietie Okon, is a founding member of Peoples Democratic Party (PDP),, in this interview with our Correspondent, kicked against zoning, describing it as a strange political culture in Nigeria, feudal and democratically anomalous. Excerpts:

Let me describe zoning. First, zoning describes the degree of exclusivity. And it is anomalous to democratic practice that in a general election, you should create a design that excludes a number of sections of the country from exercising their rights to vie for an office, not to talk of the highest office in the land.

I believe to a large extent that it is a feudal practice began in the ancient time. It was a platform of exclusivity. And because it narrows the political space, it restricts participation; it also denies any given political group or community the right of choices. Now today they talk about zoning and as far as I'm concerned, I think that it is antiquated and has no place in the current lexicon and dynamics of Nigeria's political realities. Why do I say that? It is envisages a pendulum swing across some hypothetical divide that was created by Lord Luggard. I prefer to call it the pendulum swing across the Luggardian line that resorts to divide the country between the North and the South, and are called the Northern and the Southern Protectorates.

If you look at Nigeria's system, that was the first structured colonial administrative arrangement. And it came into force for convenience of the colonial masters; it came into force in 1914. In the year 2010; that is in four years, that Luggardian line, that political arena will be 100 years old. And you find that you cannot situate it in the realities and dynamics of current political and administrative arrangement in the country.

As far back as 1954, even before then under the Macpherson constitution, Nigeria had been redesigned administratively into three regions which were again later being divided into four regions. By 1967 it had become 12 states; and of course we have seen that we moved into 36 states. By 1994 constitutional conference, that conference had recommended, had adopted the geopolitical arrangement for ensuring cohesion in the country; a geo-political arrangement which the states where on the basis of proximity and affinity, a residual administrative arrangement that they had some commonality. They were arranged into 6 zones. So we are living today in the realities of that constitutional recommendation which was given administrative fiat. And in routine individual parties different strategies were adopted. The 1998 emergence of Obasanjo wasn't a result of zoning.

OBJ was never a product of zoning
Obasanjo emerged because there was a consensus in the country that the zone from which he emerged had been short-changed by the military junta led by Babangida who annulled an election that was judged to have been the fairest and most transparent in the country even by the admission of the man who annulled it. And so there was a perception that the West which is that particular section of the country that they had received the rough end of an act of injustice. And there was also the feeling that they did by count themselves as part of that democratic process that was being ushered in.

And in order to ensure an acceptable and substantial degree of inclusiveness in that election, a concession was generally understood; it was a conventional rather than a legal act. It was a political conventional law which you find that most presidential candidates came from the Western region; what we now know as the Southwest zone. Falaye and Obasanjo were the two credible candidates for that election. The country displayed for once, just as they have recently displayed over the assessment of the fact by their common conscience that somehow the Niger Delta, comprising substantially, the South-South, had suffered years of deprivation.

So in 1998, the general mood in the country was to compensate the South-West for the arbitrariness that resulted in the annulment of the June 12 election. There was nobody including those to day that are earlier stated who did not concede that Abiola who came from the South-West won that election. That was the basis of Obasanjo and Olu Falaye emerging as credible candidates for that election; it was a one-stop exercise.

PDP never zoned presidency to geo-political zone
In 2003 that they are laying claims, the fact bears testimony to the non-existence of the zoning arrangement. Who were those who convicted and marketed themselves against Obasanjo even within the PDP for the party's ticket? There were the following: Gemade Rime - Gemade himself has thrashed out zoning by stressing that point that if there was zoning he would not have competed for the party's ticket just as Rimi also competed.

Zoning unrealistic
So the issue of zoning, first, it is antithetical to the urgencies and the aspirations of Nigeria. What is the ideological content of zoning? They all talk about zoning. What comes with zoning? What makes up your zoning package? What are the policy thrusts that will address the vexatious conditions of the country, leading nationwide to a general feeling of discontent whether you are from Northeast, Northwest or wherever. the general cry as of today is that the country has not served its citizens well. So as we go into a new jubilee, as you step into the next 50 years, like, El-Rufai and the rest have pointed out, it is an assault on our senses that people should be talking about the exclusions. They are asking that each and everybody called to this context with clear ideas, with positions that hold out hope for the Nigeria citizens. They should tell us how they tend to address the debilitating conditions that have remained an albatross to the citizens. They should tell us how they intend to raise the condition of the Nigerian citizen. When they talk about zoning, I do not know what that implies.

With Sambo, zoning is intact
Let us now go back to the issue particularly as it affects Jonathan, the president. Even if you make any concession to the existence of that anomalous facility, how does Jonathan not qualify to stand elections? First, it is assumed that there was some zoning to the North-West, because you begin to make arrangement only after the first position has been ascertained then other things are on quid pro quo basis. Yar'Adua emerged as the president of the country, he comes from the North-West. He picked Jonathan from the South-South, that immediately became the ticket; and by the unfortunate circumstance of life, the president passed on. Jonathan assumed the position as president of the country as prescribed for in the constitution.

It is there clearly stated that in circumstance, the president the vice-president takes over the office of the president. Those who are talking about zoning, are they therefore asking that president Jonathan, not in anyway disabled by the constitution, that he should have had to abandon his right under this constitution so that he will satisfy some nebulous zoning which is situated no way in the bill of rights of the Nigerian statute books?

Furthermore, who are really those in breach of the zone? Jonathan returned the presidency to equilibrium by picking his vice from the North-West. If the presidency is one single ticket; it is the same coin, it means that Jonathan was one side of the coin, just as he was one side of the same ticket, and as compelled by the constitutional provisions, to assume the position of the president, he has kept faith by picking his vice from the North-west, the same vice president he has proceeded to announced as his running mate for this election. So those clamouring for zoning are they from the original pairing. Atiku is from North-East, Babangida is from the North central, were they parts of the original pairing? So, if we have to descend to pedestrianism of the argument as promoted by this people, it is Jonathan who has done more to preserve zoning. They are those breaching their much vaunted zoning.

Presidency not IBB's birthright
Babangida claimed that Jonathan was an opportunist. But where is the element of logical rationalization between the Babangida's definition of opportunism; he who took violence constituted authority by acting in concert with rebellious elements in the military to overthrow the government of Shagari; he who shed his constitutional projects, constitutional premise to wage war against a legitimate government and overthrow that government and took it over because they had guns; and he is the one accusing Jonathan. If he accusing Jonathan of opportunism, the question arises: is it Babangida's birthright to be president? If Jonathan is being opportunistic, is it because it is Babangida's birthright. Because if you in accuse a man that is conducting within his constitutional vestment of opportunism, then you must have a claim to the presidency of Nigeria other than by the processes prescribed by the constitution. That is why the issue of birthright arises.

Mega party claims of potential election fraud:
Until they are registered we do not know what they are talking about. Do they think that it is beyond Nigerians to conduct free and fair election? Or do they think that it is not within our character to be fair and transparent? They are talking now on the real inert politics of a true and average Nigerian.

The president has repeated consistently that for him whether he is a candidate or not, his legacy will be an election that is adjudged by all to be free and fair. And that is the president of Nigeria talking. You must not today begin to question the integrity of that commitment.

2011, Jonathan first or second term?
Why do not you ask that before the constitutional experts? I think that is something that will be clearly determined, there are institutions in the country that is .vested with authority to make pronouncements on those things. As far as know, Jonathan is going to election as president in 2011; 2015, if the constitution permits. I have heard all sort of that he cannot be sworn in twice. But I am not legal or constitutional expert within that sphere. I believe that he is a man of great integrity and it will play out what is right, legal, proper and moral.

We are determined that Jonathan's government does not fall into the condition of relapse. The relapse trap was the beginning to pander to policies that were not in tune with the hopes and expectations of Nigerians. That for accounted for the failure. We cannot say that there had not been such degree of the betrayal of trust. Because we recognize that, we will continue to say that Jonathan's government from 2011 will be a first term into the new quarter of government dedicated first and foremost to the people of the country; committed to address their wants; committed to reversing the conditions that have generally make the populace depressed and lose the trust in government.

Jonathan, a reluctant president?
There is no reluctance about Jonathan. He is risen to the challenge that is imposed on him first by the constitutional provisions; second, he's fired up by the challenges which is exposure to the presidency has to him as realities of our true conditions. Do you expect him to turn back; do you expect him to say these are insurmountable challenges? I believe that he is more than ready to face up to those challenges. I believe that with determination and commitment he will lead the country towards a new age of satisfaction; a new age of delivery on the areas of responsibility that ordinarily governments are expected to exercise.