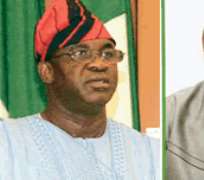 Senate President David Mark & Sen Ayogu Eze
The enthusiastic and elicited interest shown by Senators in the passage of the River Basins Development Bill penultimate week was unanticipated since it was not Appropriation (money) Bill in which every legislator usually pays so much attention to ensure that the needs of members of his constituent are adequately met in the financial year.

Penultimate week,  the nation's Red Chamber  considered and passed clause -by -clause, a Bill for an Act to Amend the River Basin Development Authorities Act and to create additional River Basins Development Authorities in which Senators canvassed positions in favour of constituents and geo-political zones towards addressing specific matters as they affect the provision of water as well as to boost agriculture.

Even though the Bill has been undergoing process of legislative filtration for more than a year ago after going through its second reading at Senate plenary, it was one Bill that Senators kept their different political affiliations aside and considered its provisions without sentiments.

This was shown in the comments of most of the Senators that participated in the robust debate as they commended members of the Committee on Water Resources chaired by Senator Bassey Ewa-Henshaw for a thorough legislative action.

Part of  the Report of the Committee that was approved by the Senate reads: 'The Management Structure of the Authorities has also been reviewed.

Each Authority will now have a Managing Director and 4 other Directors responsible for various aspects of operation as outlined in Section 7(1).

Also in Section 2(2), the Boards of the Authorities have been given powers to formulate policies and guidelines for and to control management.'  These were absent in the existing law.

As soon as the Bill was formally received by the Committees, it immediately swung into action by conducting a Public Hearing to garner the views of members of the public just as it equally embarked on wide and substantial consultations with the Ministry of Water Resources and other stakeholders as a follow up to the Public Hearings which culminated in arriving at valuable and comprehensive review of the existing Act.

Areas of  Change of in the Bill
Following the wide consultations and research carried out by the Senator Ewa-Henshaw led Committee, it  arrived at far reaching recommendations that introduced fundamental changes with a view to galvanize the Water and Agriculture sectors as a means of boosting the nation's economy.

Daily Sun reliably gathered that before the passage of the Bill by the Senate, there were actually twelve Basin Authorities in existence, as against  the eleven reflected in the law as the Upper Niger Basin Authority created in 1987,  without recourse to the law. It had  thus existed without legal backing for over 23 years.

In the wisdom of the Senate, while considering the Report of its Committee on Water Resources for approval, it reasoned that rather than scrap the existing Upper Niger Basin Authority that was not backed by law, the country should rather have more of the River Basin Development Authorities to add to the eleven which were legally established.

Accordingly, it created four additional ones to bring the numbers to sixteen in order to cater for as well as meet the needs of some States that are far from the location of the Basins which naturally  denied them the  benefit for which they were established.

The splitting of the Anambra/Imo Basin was one of the core reasons for the amendment of the Bill. The Senate adopted the recommendation of the Henshaw Committee that reasoned that  ''it is important for hydrological considerations to be taken into account in the establishment of River Basin Development Authorities just as it was equally important to bear in mind the additional responsibilities to be assigned to them so as not to over burden the Authorities''.

In this wise, the Senator Ewa-Henshaw led Committee recommended that each Authority should have a catchment area of between 2 or 3 states which led to the creation of three additional Basin Authorities.

While presenting the Report of his Committee before the Senate for adoption and subsequent approval, Senator Ewa-Henshaw said that following consultations with experts and officials of the Ministry of Water Resources, it was agreed and resolved that responsibility for the management of dams as well as the associated irrigation, water supply and hydro power schemes should be vested in the hands of the River Basins Authorities.

The Committees report observed that Nigeria has over two hundred dams of various sizes thus recommended that each Basin Authority should take charge of the dams and other facilities within its catchment area just as the Authorities were given powers subject to the approval of their respective Boards to go into public/private partnership arrangements and to also attract private investors to develop and concession dams on viable and sustainable terms in such a way as to facilitate tourism, expansion of irrigation, water supply and hydro electric power.

Daily Sun gathered that the focus of the Bill is aimed at enhancing self sufficiency and sustainability as well as reduce dependence on yearly budgetary allocations thus giving the understanding that the River Basin Authorities play an important role in bringing the Federal Government closer to rural Communities across the country and in line with recommendations of the Presidential Committee on the Restructuring of River Basin Development Authorities. The Senate approved the recommendation of the  Committee that statutory power be given to the authority to  enable it to engage in agricultural support schemes and rural development programmes.

The expanded responsibilities of the Authorities as contained in Section 5 which deals with Functions of the Authorities reads in part: 'The functions of each Authority shall be to undertake comprehensive development of both surface and underground water resources for multipurpose use with particular emphasis on the provision of irrigation infrastructure and the control of floods and erosion and for water-shed management;

To construct, operate and maintain dams. Dykes, polders, wells, boreholes, irrigation and drainage systems, and other works necessary for the achievement of the Authority's functions and hand over all lands to be cultivated under the irrigation 'scheme to the farmers;

To supply water from the Authority's completed storage scheme to all users for a fee to be determined by the Authority concerned, with the approval of the Minister;

To develop and keep up-to-date a comprehensive water resources master plan identifying all water resources requirements in the Authority's area of operation, through adequate collection and collation of water resources, water use, socio-economic and environmental data of the River Basin.'

The Bill which is in 14 sections and 2 schedules also captured the tenure of office of the Board Members including the Managing Director that has been put at four years, renewable.

This is an improvement over the provisions of the existing law that allows for only three years but also renewable for one further term of three years.

In the wisdom of the Senate, since it is expected that some of the Authorities will generate substantial revenues from fees and charges on concession arrangements and supply of water among other things, Section 9 (2) (b) has been amended to require them to pay such internally generated revenue directly into the Federation Account.

The amended Section 9 (2) (b) reads: 'Such other sums of money as may, from time to time, accrue to the Authority provided that revenue generated internally by each Authority's fees or charges from operation of dams, irrigation and water supply either directly by itself or through public/private partnership arrangement shall be paid directly into the Federation Account', after Authority.

The Senator Ewa-Henshaw Committee said that it was convinced that the restructuring will regenerate the River Basin Authorities, breath new life into their activities, make them more relevant and help them contribute more meaningfully to our water, agricultural and rural sectors.

It is believed that the passed Bill by the Senate when eventually concurred by the House of Representatives and eventually assented to by the President, would go further to create jobs for the teeming unemployed youths that are roaming the streets in search of work as well as help address the food need of the nation.