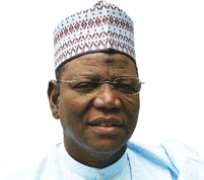 Lamido also insisted that the Peoples Democratic Party (PDP) family must defend the Goodluck/Sambo ticket, which is a fallout of their hard-earned 2007 electoral victory.

Speaking yesterday when he received the Goodluck/Sambo Campaign Organisation in his office in Dutse, the governor explained that the proponents of the Northern presidency never supported their own in office, noting that the late President Umaru Musa Yar'Adua was among the best ever leaders Nigeria produced, but faced serious opposition from the region.

'What is that thing you called northerner more than Yar'Adua. We had him, Nigerians believed in him, he restored the confidence of governance because Nigerians saw in him a very honourable person and yet, it is us here who were undermining him. And God took him away, so when you are talking about a northerner, which northerner are you talking about,' he queried.

According to him, the ranting and the noise about northern presidency is myopic thinking and hypocritical of the northern politicians, who do not wish the region well.

The same people kept fighting him up to the Supreme Court, so the crisis was purely a northern crisis; it was a northerner fighting a northerner from his own home state, in Katsina,' he declared.

'God gave you a northerner, you didn't support him, what else do you want? We have to be very honest.

Lamido explained that the Jonathan/Sambo ticket was part of the PDP victory of 2007 and therefore, Nigerians must defend that fortune and the victory, saying no one should use any primordial sentiment to deny Nigerians the best.

'So to me, what I see in Jonathan/Sambo is a PDP victory of 2007, a PDP fortune which we must defend,' said the governor, pointing out that politics of ethnicity or religion is very dangerous to the survival of the country as one indivisible nation.

He said for the country to grow and prosper, there must be internal cohesion, noting that the North or South politics must be discarded if the country was to move to the next level.

'We shall not allow this kind of division; the North, South, Christian, etc. and other debates. It is dangerous for us. First, we need to come together because if we do not unite, there is no way that Nigeria can grow.

Lamido frowned at the agitators of the northern presidency, who he said abandoned the party (PDP) in 2007, fought it up to the Supreme Court and now because of their personal interest, they were calling for a northern presidency.

Those talking of the North, where were they in 2007, even those who were in the PDP in 1999, by 2007, they had abandoned it and now out of double standard they are making.'

Earlier, the Director-General of the organisation, Senator Dalhatu Sarki Tafida, had commiserated with the people through their governor over the flooding that ravaged some parts of the state recently.

He also lauded the governor for numerous developmental projects which he said were exemplary on how business of governance should be conducted.