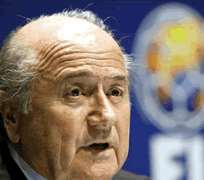 Blatter
FIFA's President, Joseph Blatter, has lambasted Dr Amos Adamu and other members of its executive committee provisionally suspended after examining their cases in relation to the bidding process for the 2018 and 2022 FIFA World Cups.

The FIFA Ethics Committee, under the chairmanship of Claudio Sulser, decided on Wednesday to provisionally suspend, with immediate effect, the members of its Executive Committee, Amos Adamu and Reynald Temarii, from participating in any football-related activity (administrative, sports or any other) and Blatter is unhappy that the affected individuals dragged the name of the world football governing body to the mud.

'FIFA not a corrupt organization,' Blatter said.
'There may be a few bad eggs but we must bring back the credibility. In our society, there are many devils and even in football's inner circles, there are devils as well but we will do what millions of football fans around the world want to see and that is flushing out these devils,' he said.

After hearing Amos Adamu and Reynald Temarii, the Ethics Committee considered that a provisional suspension was required, while the investigation continues, taking into account the gravity of the case and the likelihood that a breach of the FIFA Statutes, the FIFA Code of Ethics and the FIFA Disciplinary Code has been committed.

Furthermore, the Ethics Committee examined the cases of four officials - Slim Aloulou, Amadou Diakite, Ahongalu Fusimalohi and Ismael Bhamjee - also in relation to an alleged breach of the FIFA Statutes, the FIFA Code of Ethics and the FIFA Disciplinary Code linked to the bidding process for the 2018 and 2022 FIFA World Cups.

The committee also decided to suspend the four officials provisionally from participating in any football-related activity. FIFA will meet again in mid-November to take a final decision.