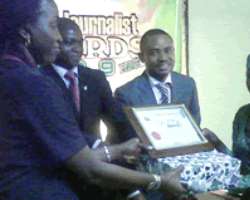 It was a day of fun, glitz and inspiration, one that will linger in many minds for long. The event was the 2009 Nigeria Young Journalists Awards held at the office of the Journalists Against Aids in Ogba recently.

The award, the fourth edition, was organised by Media Career Services (MCS).

Tosin Makinde and Adenike Ashogbon, former interns at The Nation Newspapers, jointly won this year's edition. Makinde who is presently studying International Relations at the Adekunle Ajasin University, Ondo State, and Ashogbon, a Mass Communication student at the Lagos State Polytechnic, beat ten nominees from other media houses to clinch the award.

The first runner-up for the award was Nwando Osaka Ifioma of Voice of Nigeria (VON), while Ishaya Ibrahim of Newswatch Magazine was the second runner-up.

Fisayo Soyombo, a graduate of Animal Science from the University of Ibadan won the maiden edition of the 'Campus Journalist of the Year Award'. Vincent Nzemeke, a Mass Communication student at the Delta State University, Delta State, emerged the first runner up, while Hannah Ojo, an English student at the Obafemi Awolowo University, Ile Ife, emerged the second runner up. All the prizes presented to the winners were sponsored by the Rivers State government.

Sunday Editor of The Nation Newspaper, Mr. Lekan Otufodunrin, explained that the award is part of the programmes that the organisation has lined up to provide opportunities and resources for journalists, as well as to help enhance their career.

He informed that Adesina Oyetayo of Punch Newspapers, who won the first edition of the award in 2006, the 2008 winner, Bilewomo Ademilola of Tell Magazine, as well as other winners were inspired to work harder through the recognition.

Executive Director of Journalists Against AIDS, (JAAIDS), Olayide Akanni commended the winners and urged other young journalists to keep striving to improve the quality of media practice in the country.

'In line with emerging multi-media approach to journalism practice, Makinde and Ashogbon represent the face of the future of journalism in Nigeria,' he said.

Segun Adeoye, a journalist with Tell Magazine who won the 2007 edition, commended the high quality of the entries submitted for the categories.

He explained that all the entries were judged based on quality of reports submitted, diversity of coverage and recommendations by supervisors.

His words: 'Entries by Makinde and Ashogbon included 'Lost in Paradise', a feature story based on a tour report by 'Real Impact for Development Foundation', a student group that visited five villages in Obafemi Owode Local Government area of Ogun State. Seasonal Schools,' another of their report, centered on visits to village schools in Ogun, Oyo and Lagos States. The 'Return of bridge culture' is another one written by them and published in The Nation Newspaper during their one year Industrial Training Programme.

'The stories were self-sponsored by the duo and their other colleagues. They did not ask for refund for their humanitarian and advocacy tours to several villages visited in the South-West to report on the state of poverty in the area, as depicted in their stories.' Soyombo won with three entries, 'Power Disaster: UI Students whimper in 'Powerlessness', 'Two minutes of madness that cost me my eyes' and 'UI's new agenda.' They were all published in The Guardian on Sunday and the Campus Life section of The Nation Newspaper.

Speaking on behalf of his co-winners, Adenike Ashogbon described the recognition as an acknowledgement of their untiring efforts at using various media to draw attention to issues that affect students and the public on campuses.

'This is like a dream. We were just doing what we loved and never knew it would bring us honour like this. This will definitely inspire us to do more. On campus, many people could not understand why, as an Animal Science student, I spend all of my time writing. I am glad this award is a proof of my effort. We thank all those who have supported and mentored us.'