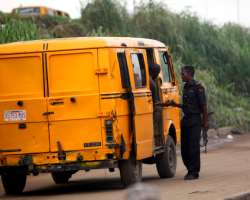 PHOTO: 'ROGER ME', A NIGERIAN POLICE RECEIVES BRIBE FROM A CONDUCTOR OF A COMMERCIAL BUS IN LAGOS.
Listen to article

Starved of decent leaders for so long, we desire half a loaf of bread as better than none. Whenever we can, crumbs are celebrated as if it is half a loaf. Those that insist on some semblance of loaf are called naïve people looking for perfect angels in a Country of few lesser devils willing to take on the bigger devils. What is important is a pragmatic leader that can operate within the system as bandage until we find a cure to corruption.

However, heavens help masses who help themselves. There is nothing perfect in this world, even our fingers are not equal. Sometimes we have to fight fire with fire and an eye for an eye otherwise we will be praying until kingdom come for that angel. It is either you rig with the instruments at your disposal or be rigged out of power. This is the situation we are reduced to in Nigeria and there are instances to make our point.

Nigerians were so livid, after lining up for hours to vote out NPN, rigged itself into power for the second term in 1983. We welcomed the lesser devils that overthrew Shagari in jubilation. It was short-lived; Buhari draconian WAI was undermined by hypocritical deal for the sacred cows. So we greeted another evil in the name of Babangida. He paved the way for Abacha that became the most ignorant evil dictator of our lifetime. It turns out, Gusau said they were takings turns, now his turn. Not in the name of the North, please.

The point is that we cannot be fooling ourselves with half a loaf of bread when in fact what we have are crumbs of bread. Take South America, where Columbia drug lords were tolerated until it became the bloodline. By the time the people had enough and returned the government to the people, so many lives were lost and so many politicians in the pocket of the drug lords were exposed. Not one was a known political leader. It is the turn of Mexico. Yet, no African would wish what Lebanon went through on Somali.

Do we repeat those mistakes or learn from others? Many reputable Nigerians have come to resign our faith to a so called pragmatic solution to our political problems. We can only fight big corruption in our Country with a less corrupt party, they warned. There is no doubt in the minds of our people that PDP is corrupt. But we also think that a realistic alternative is to give them a good fight through a lesser devil party like ACN.

Let us face it, there is no country where corruption in some form is not present but a rich country with both natural resources and technical skill that spill their potentials outside the Continent unharnessed, may slide into extinction. The harder the masses work, the less we earn. Patterns of endemic corruption in our “colo-mentality” shape the future and behavior of those in succession. Our best brains are used against us and our natural resources are sold out for ten cents in exchange for a dollar glitter, to corrupt our polity and financial stability. How can we progress?

ACN is only giving half a loaf a bad name. It will be a mistake to call all those men in ACN that had served our Country well in the past and almost died fighting, corrupt. Some of them were disciples of Awolowo and Aminu Kano but instead of fighting corruption to death in their old age, think it may be wise to compromise half way in order to have the resources to fight the bigger devils. Even, if they rob Omoboriomo to pay Owoboriomo.

What resources do APGA and Labor Party have? The power of the people that were fed up of taking more, was their deadly weapons. If we can replicate parties like APGA and Labor Party all over Nigeria, ANPP, as one of the parties that no godfather has been able to dominate, will transform itself. Nobody can claim that our judiciary is not corrupt but at a different level of review, it can confirm or reject the power that matters most – people’s votes. The changes in the mood and tolerance of the polity for corruption can be reflected in court decisions regardless of stare decisis, status quo or power that be. It is how the serf, slave, women and human rights were forced to be recognized.

Yet, there are many decent Nigerians but they cannot even make a quorum to influence decision making. The fact that we have them in every party in Nigeria is not enough. They have not being able to tame PDP and ACN as they become the followers of the rich and the powerful. When AD lost power in the West to OBJ, some men of substance and courage in the past submitted to the only surviving leader in the West for their keeps.

People’s power can only be suppressed for so long. In some states elections have been belatedly overturned in view of status quo and the power of the day. Justice delayed in real time better late than denied in lifetime. OBJ watched some of his forty thieves in PDP jailed and exposed, and tamed the PDP and AD, to his advantage. He squandered world reputation for power. It remains to be seen how far Ebele will go to sanitize PDP.

We must not forget what matters most during our jubilation in Ekiti, it is the resilient power of the people that is translated into reality by the court. There are out of state godfather and hanger-on waiting to claim credit and demanding the arms and legs of Ekiti people. Let us hope that Fayemi, that has no blemish in his background, will live up to his words – that the resources of the people will not be used for the caprices of a few.

The people of Ekiti are tough and Fayemi is a son of the soil. How any Baga will allocate his cabinet positions or demand the black gold of Ekiti, apart from the reciprocal unity in the Country, is under our watch. There is no such slogan that Ado Ekiti is no man’s land or Federal off-shore resource. In short, Ekiti’s funds stays in Ekiti for infrastructures and the development of the State. If anyone dares, let him ask for their pounds of flesh.

Fayemi must be able to stand up to loan sharks waiting to collect usury. Fulfill OBJ words that all those who invested in him must consider their investment lost. APGA’s Obi does not owe anyone outside Anambra State nor does Mimiko owes anyone outside Ondo State. It must be refreshing to these states that the least of their problems is giving a lion’s share of their taxes and resources to some godfathers outside of their states.