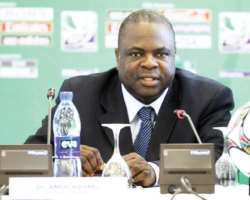 For anyone in doubt that FIFA is an under-development agency, the revelations by the Times of London on the Amos and Andy (Amos Adamu) comedy show, has once and for all removed any shadow of doubt. After a World Cup besmirched by stories of Sepp Blatter – FIFA president - handing choice contracts to his nephew and other friends, confirming nepotism and shady dealing at the highest reaches of this agency, what else could be needed to confirm the above that indeed FIFA is an underdevelopment agency? We say that FIFA is an underdevelopment agency because FIFA actively collaborates with the worst of the propensity for developing nations to use sports and sporting events to portray to the rest of the world that “all is well” in these nations, when the reverse is the truth. In the year before South Africa 2010, FIFA looked on at the Angolan fiasco where the country – Angola - imported even day laborers from China as construction workers, and went on to spent several billions on the construction of stadiums – for the African nations cup - only for local residents to rise up – in criminality – and assault participants in the FIFA jamboree. As the Angolan jamboree proceeded, you didn’t need spectacles to observe that the stadiums were empty – that is, besides contingents of “developing country officials” read: Nigerian government functionaries, flush with esta-code petro-dollars originally earmarked for development. The locals voted with their feet, having woken up to the reality that the 4-5 stadiums were white elephant projects they least of all needed. For having the “temerity” to dabble in the affairs of the NFF (Nigerian Football Federation) even when obvious examples of corporate irresponsibility, greed and outright theft were apparent, the Nigerian government was cowed into rescinding actions against the mighty local FIFA representatives by the Blatter led FIFA government; we shrugged off colonialism for this? Any agency concerned with its image and the manner of conduct of its local officials might have reined these local officials in at some point, but not the mighty Blatter led FIFA. Standing on the meaningless conviction that governments in developing countries should have no say in the local FIFA organizations – even though it is well known to FIFA and “all of us” that “wink-nod-wink” these developing nations are the primary sponsors of the local FIFA offices - Blatter threatened to suspend Nigeria from all international engagements involving football! Talking points for the casual observer should include the facts that football associations in developed countries like the US etc. receive little or no government funds. This means that when the FIFA jamboree “rolls into town” they don’t get to speak with the US government – in a monetary sense - despite Obama and others coming out in support of FIFA activities, even actively wooing them. Here is the link to US Soccer: http://www.ussoccer.com/ At the bottom of the home-page you will see the list of US Soccer’s sponsors; also on the homepage you will see that US Soccer has a “store” where you can stock up on US Soccer memorabilia – shirts, key chains etc.! Here is the link for the NFF: http://www.nigeriaff.com/ No sponsors, no store, only thieves! You be the judge. Enjoy this link to the Amos n Andy show, a racist sit-com from the 1950’s that probably formed the bedrock of the background of a fellow like Sepp Blatter, the defacto colonial ruler of Nigeria and other developing countries.http://www.youtube.com/watch?v=3Md2Fr43ZAs Maybe it’s time for Nigeria and other developing countries to do an OPEC for FIFA, and start holding “20-20 Cricket style tournaments” in the stadia FIFA has coerced us into building; poor man no get brother [sic.]