BABS FAFUNWA: THE MAN WHO KEPT HIS NAME 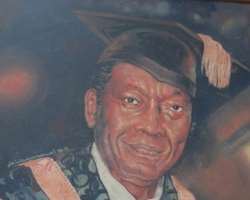 To know Professor Aliu Babatunde (Babs) Fafunwa at close quarters was to be tempted into believing in the impossibility of his death. How could a man so graceful and rich in his humanity, so accomplished yet so gregarious and approachable, a man possessed of the deepest, most resonant laughter I ever heard – how could such a man die?

Yet, in the early hours of Monday October 11, my family and I were in a hotel room in Washington, DC – we were visiting our eldest child, a freshman at Georgetown – when my wife’s cell phone rang. Half awake and half-asleep, I heard her ask repeatedly, insistently, “What happened to him? What happened?” I shook off sleep and formed the only words I could muster in the circumstance: “Who are you talking about?” “My father,” she answered. Seized with fright, I asked, “What happened to him?” Anxious, perhaps, not to startle our possibly eavesdropping children with that dreaded, dreadful truth, she simply waved her hand. The gesture, more eloquent than words, said it all: He’s dead.

In the darkness of the room it was difficult, for a moment, to come to terms with the finality of this awful truth. Could it really be true? My wife made other phone calls, including one to her mother, my mother-in-law. Each call brought home the reality of that devastating news.

Fafunwa, the one man who – outside of my parents – had given me the most enduring gifts in the world, had indeed danced his last dance and gone to join the ancestors. His and his wife’s greatest gift to me was, of course, of their daughter, Sheri, as my wife. Sheri, like her siblings, mirrors her parents in a marvelously integrated way: beautiful, inside and out.

The story of my journey to being Fafunwa’s son-in-law is germane to the mettle of the man that Nigerians, and the world, have been mourning since last week.

When my friends ask how Sheri and I met, I tell them that I gatecrashed her party and stole the prize. This lighthearted, abridged version of events actually contains the truth.

I had arrived in Amherst, Massachusetts on December 10, 1988 to take up an assignment as founding editor of African Commentary, an international magazine published by Professor Chinua Achebe and run by Professor Bartholomew Nnaji. One day, six months after my arrival, I was riding in a Nigerian friend’s car when he told me that a Nigerian graduate student at the University of Massachusetts was throwing a birthday party that night. It would be a rocking party, he suggested. The problem, however, was that he wasn’t invited.

“Let’s go all the same,” I urged, even though I didn’t even know the woman giving the party.

Later that night, we arrived at the venue of the party, opened the door, and walked in with an exaggerated swagger to be expected of intruders. Throbbing music and the gaiety of dancers reached us from a room set to the left of the living room. My friend and I were striding towards the pulsating hub of the party when something drew my eye to the right hand corner of the living room. I saw a man ensconced there, his face fixed on the page of a book. I was astonished. Who, I wondered, could manage the feat of reading next to a room where music pounded, feet stamped the floor in dance, and ardent voices were raised in conversation?

Why, it was Professor Fafunwa! I had seen that unmistakable face numerous times on the pages of Nigerian newspapers and television.

Instead of waltzing to the dance floor, I made a detour and headed in the man’s direction. I went to him with a measure of trepidation. Would this man who, in the eyes of Nigerians, embodied the finest tradition of education deign to speak to me? Would he even pause from his reading to acknowledge my presence?

Well, that night I found out something about Fafunwa that did not escape anybody who had the luck to meet him in person. He had this inimitable warmth, a gregarious disposition and generousness of spirit, a humility and modesty that never diminished his presence but rather amplified and magnified it. That night, I had my first experience of the man’s facility for putting people – regardless of their station in life – at ease. That knack of his for radiating warmth represented a particular, effortless genius. It lent him an affectionate, magisterial aura. When you met him, you beheld a man who was so comfortable in his own skin, so profoundly at peace with who he was, that he had no use for self-inflation or that need for an affected pomposity that is the trademark of mediocrities and poseurs.

That night I came to know some of my future father-in-law’s signature attributes. First, he was deeply human. And for him, this meant a stubborn belief in the dignity of every person. In the years to come, I saw him tell stories to children, parley with youths on social issues, engage strangers in conversation, speak to fellow scholars, or interact with his domestic employees. He brought to each relationship that depth of humanity that made you believe – no, know – that he considered you inherently deserving of dignified treatment.

It is hard to capture in words the way in which Fafunwa was amazingly – scandalously – humble. His wife and he would often visit us for a month or two in the summer. The man would insist on taking his turn to cook meals for the entire family. Sometimes, you came into the kitchen to catch him washing the plates. When you protested, he would simply turn and ask, “Why not? Don’t I use the plates to eat?”

At his home in Lagos, any visitor was automatically invited to sit with him and his wife to eat. Even when my small crowd of friends come calling to see me, he would insist that they all take their places at the table. The more, for him, translated into the merrier.

Since his death, many have used that grainy word “detribalized” to describe him. In one sense, Professor Fafunwa was actually the most tribalized man I knew: all the world’s people were his tribe! He was allergic to ethnic jingoism and all the other ruses that people manufacture to divide the human world into camps. He married Doris, the love of his life, a woman from rural Vermont, and they remained movingly close till he drew his last breath. For him, it was far from extraordinary that his two sons are married to Igbo women and one daughter, Sheri, to an Igbo man. He was clear-sighted enough to recognize that the claims of love transcend the strictures of “ethnicity.” He was a devout Muslim, but he exuded an admirable respect for adherents of other faiths. He never for a moment left the impression that those who embraced other religious practices, or even none, were somehow deformed, inferior or unworthy.

Fafunwa was an elephantine library of stories and had a mind that could recall events that happened in his childhood with a stunning exactitude. He possessed an inexhaustible bank of jokes and had a raconteur’s gift for inflection, a style that imbued his anecdotes with humor. He had a big, resounding laughter. He would finish a funny story and release that booming mirth, clapping his hands and stamping his feet and always laughing the longest.

Fafunwa was greedy only in two respects. He was greedy for knowledge and for friendship. He read voraciously and wrote unceasingly.

Since Fafunwa’s death my phone has rang nonstop, each condoling caller anxious to underline how the man touched his or her life. But it was Professor Chinua Achebe who, with an economy of expression that he has patented, uttered a phrase that struck eloquently at the heart of Fafunwa’s life. Fafunwa, Achebe said to me, “kept his name.”

I immediately recognized those words as capturing the essence of my father-in-law and his noble legacy. In a society where too many are quick to exchange their reputations for cash, to suborn themselves for a mess of porridge, to sell themselves to the highest bidder – this man insisted that his name was his most cherished and lasting asset, his jewel, his best currency. In a country where public officials and bankers cart away hundreds of billions of naira of other peoples’ money, Fafunwa held on to his name. Against all temptations, he refused to soil his name.

Fafunwa understood something that too many “prominent” Nigerians easily forget: that money, in the end, isn’t everything. He exhibited an instinctive sense of this truism even before he emerged as a familiar figure on the national scene. On his return from the US, he had taken a job with Esso, the oil company. But he soon left that job, sustaining a significant pay cut, to take up a teaching post at the University of Nigeria, Nsukka. For him, the opportunity to leave an imprint in the area of education was far more compelling than the seduction of cash.

And what an indelible, magnificent imprint he left! He bestrode Nigerian education as a colossus, a teacher par excellence. Given his outstanding achievements as an educator and scholar, it was so deeply sad that, two weeks ago, Dr. Goodluck Jonathan stepped up to a podium and urged that Fafunwa apologize for the failure of the 6-3-3-4 system of education. There’s no question that the state of education in Nigeria today is a shambles. But only an alien from Pluto would have suggested that Fafunwa authored the mess.

Jonathan’s statement, then, was nothing short of bizarre and shameful. If it was calculated to taint Fafunwa’s legacy, it had the opposite effect. The Next edition of October 5, where Jonathan’s statement was reported, elicited ninety-nine reader responses. I was not surprised that not one respondent agreed with Jonathan. The readers recognized that the man Jonathan sought to pillory had, in fact, kept his name.

One was often curious about the source of Fafunwa’s down-to-earth mien. His biography suggests that he was nurtured that way by his parents and larger family. But perhaps that early formation was further accentuated by Dr. Mary McCleod Bethune, a remarkable influence on Fafunwa’s life and education. After taking a first degree at Bethune-Cookman College in Daytona Beach, Florida, Fafunwa left for New York City to start his graduate studies. In his fascinating book, Up and On!: A Nigerian Teacher’s Odyssey, he allows us to read a letter he had received in 1952 from Dr. McCleod Bethune – his mother-figure who was the founder of Bethune-Cookman College. In the letter’s concluding paragraph, the woman offered both a prayer and an entreaty: “God bless you my son, keep your hands in God’s hands, your feet solidly on the ground where the common man can touch you.”

It’s obvious that Fafunwa never for a moment divorced those precepts. He let them inform his public and private life. And because he left such a rich, impressive legacy, because he touched so many people and permitted them to touch him in return, because he inspired us with his life of service, because he left us prodigious ethical and moral funds, heck, the man will never die!