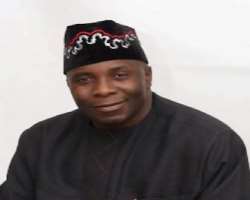 UYO, Oct 18, (THEWILL) - Forced by the fears that he may not be given the ticket to contest against the incumbent for the governorship position in Akwa Ibom State on the platform of the People’s Democratic Party (PDP), a governorship aspirant, Senator John Akpanudoedehe has formally decamped to Action Congress of Nigeria (ACN). Akpanudoedehe, a former Minister of State for the Federal Capital Territory (FCT) at a colourful occasion held at the Saint Patrick Primary School, Uyo, well attended by the leaders of ACN, including the National Chairman of the ACN, Mr. Bisi Akande, former National Republican Convention Presidential Candidate, Chief Tom Ikimi, National Secretary, Usman Bugaje and the rest, denounced his membership of the PDP, and formally declared for ACN. THEWILL reports that, Akpanudoedehe has been the last man standing in the fight for power against the incumbent, Godswill Akpabio in Akwa Ibom. His political rallies have been truncated on many occasions even as he has been squeezed by the force headquarters Abuja for alleged involvement in the murder of a PDP chieftain in the state, Elder Paul Inyang, whose death is still being investigated. “I want to officially denounce my membership in PDP and formally declare for ACN, I hereby declare that I overturn PDP members in Akwa Ibom into ACN,” Akpanudoedehe stated, expressing optimism that his new party will send Governor Godswill Akpabio packing from the Hilltop Mansion come May 2011. Speaking at the occasion, the National Chairman of ACN, Chief Bisi Akande stated that ACN will use its symbolic broom to sweep away the PDP government in Akwa Ibom State and Nigeria come 2011, saying that Akwa Ibom will be the next state to be captured by the party.

According to him, PDP government is not developing the people in the society urging the teaming supporters of the party to register en-mass and acquire voters registration cards as that will be the party’s weapon to win the state in the race. Akande, who was represented at the occasion by the National Secretary of the party, Dr. Usman Bugaje said he was in the state to give his total support to Senator Akpanudoedehe in his bid to become governor of the state next year. He called on Nigerians and the people of the state to resist any attempt by the PDP government to prolong or extend the transition process by tampering with the election timetable even as he formally welcomed the former FCT minister into the fold. Chairman of the occasion, son in-law of former Governor Victor Attah, Dr. Udoma Bob Ekarika express optimism that; Akpanudoedehe would be governor of the state in 2011 from the mammoth crowd of former PDP members who have decamped to the ACN. Also speaking at the occasion, Tom Ikimi claimed that the ACN had already taken over Akwa Ibom State with the mass defection of PDP members to the party, saying that nobody would prevent Akpanudoedehe and the ACN from capturing the state next year. According to him, “ACN will win by the ballot in the state and if there is irregularity the party will win at the court,” he said. “When I was the NRC Chairman I was in the state to campaign for Obong Akpan Isemin of blessed memory and he won. That I am here to campaign for Akpanudoedehe means that history will repeat itself,” Ikimi boasted. He charged party faithfuls to stand against any electoral fraud that may be perpetuated by the PDP in next year’s elections, adding that they should also stand up and resist any plot to extend the May 29 hand over date to October. State chairman of the party, Mr. David Ekanem in his welcome address disclosed that Akpanudoedehe decamped with 21, 152 PDP members to ACN, reaffirming the party’s hope to win the elections in Akwa Ibom come 2011. It is worthy of note that the ACN is still basking in the celebration of its victory over Ekiti state at the court, just last week.