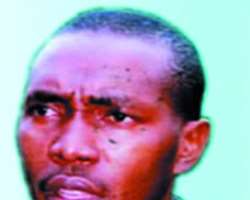 Chris Uba
Self-acclaimed political godfather of Anambra State, Chris Uba, may have again incurred the wrath of the Peoples Democratic Party (PDP) as the South-east zone of the party, yesterday, disowned him.

Consequently, the South-east Zonal Executive of the party has called on the National Working Committee (NWC) of PDP to stop forthwith from recognizing him as a Board of Trustee member, stating that he never was and not qualified to be. But in a swift reaction, Chief Uba spoke through his Personal Assistant, Mr. Emeka Okeke, described Metuh's executive as illegal.

The zonal executive also said Uba was identified as a major problem of the party in the state and one who had used his 'purported claim' of membership of the BoT to cause division and massive problem in the party. Briefing newsmen in Awka after the meeting of the Zonal Working Committee, the National Vice Chairman, South-east of the party, Chief Olisa Metuh, said Uba had never been admitted as a BoT member and was not up to the age of 50 years which is the admittable age for the BoT members of the party.

He said, 'further to the conduct of this primary, the Zonal Working Committee held a meeting today, October 17, on the various problems of Anambra State PDP and has indentified people who are the cause of these problems.

'We have reviewed the constitution and we are stating clearly that by virtue of Article 12.76 (b) of the party's constitution, you must attain the age of 50 years to qualify for appointment into the Board of Trustees. 'Chris Uba at the time of his purported appointment had not got up to 50 years. Consequently, his appointment was void abinitio and in fact, never existed, because you cannot build something on nothing. He never attained that age which is a very fundamental issue apart from the issue of integrity and having to be loyal to the party and other things but on the issue of the age, we are saying that his appointment was void abinitio.

'Furthermore, Chris Uba's purported appointment into the Board of Trustees did not fall into any of the categories as entered in our constitution by Article 12.26 (1). There are categories, either you are appointed by the zone or you are a founding member. 'His appointment was an illegality. It was contrived by a few people without any regard whatsoever to the party constitution, to the interest of the party, either in his local government, in the state and in the party.

'All we have seen in the past two years is based on this purported claim of his trying to cause massive division and massive problem in Anambra PDP, in fact, to destabilise the party in Anambra. 'Consequently, the Zonal Working Committee is urging the National Working Committee to take note of this prevailing situation and accordingly desist from according Chief Chris Uba any right or privilege due to members of BoT of this great party as he is not representing the PDP in Anambra and he is not representing the South-east PDP. It's void abinitio and he is not a member of Board of Trustees.'

But reacting to the zonal executive's statement, Okeke contended that the national leadership of the party had earlier annulled three zones for having inconclusive congress to elect national vice chairman, which he said the South-east was part of. Furthermore, he said Metuh was only trying to justify the money allegedly collected by the zonal leadership from party members with a promise to discredit Chris Uba and ultimately make way for the nomination of his perceived benefactor.

Okeke insisted that Metuh was looking for cheap popularity with Uba's name.