NO GOING BACK ON CONSENSUS CANDIDATE 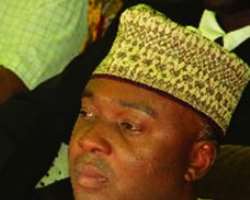 Saraki
Peoples Democratic Party, (PDP) presidential aspirants who are being screened by a committee set up by the Northern Political Leaders Forum, [NPLF] to produce a consensus candidate for the zone have restated their commitment to the work of the team and what could eventual be its final judgment.

Media reports had revealed that last Tuesday meeting convened by the committee under the chairmanship of former Finance Minister, Mallam Adamu Ciroma was deadlocked as it could not agree on an anointed candidate.

'We are amused by the spate of sponsored news stories and write-ups insinuating that the decision of GENERAL IBRAHIM BABANGIDA, ATIKU ABUBAKAR, GENERAL ALIYU GUSAU AND DR ABUBAKAR BUKOLA SARAKI to adopt a consensus presidential candidate from amongst themselves for the purposes of the forthcoming PDP presidential primaries is deadlocked.

The intention of those behind this false and ridiculous claim is to deceive the Nigerian people, create disharmony among the various campaign organizations and distract the Committee charged with the task of selecting a consensus presidential candidate from discharging this historical responsibility. These lies apparently emerge from the fertile imagination of such writers and their shadowy sponsors and their lies have no bearing whatsoever on the truth of the situation.

The Committee charged with the onerous duty of selecting and adopting a consensus candidate is working diligently and assiduously to complete its assignment. We collectively reiterate that the Committee enjoys the confidence and support of the four presidential aspirants and their various campaign organizations as well as the confidence and support of well meaning Nigerians nation-wide!

The four presidential aspirants who we represent are irrevocably and irreversibly committed to the process that will throw up a single presidential candidate and are fully briefed by the committee on the progress of its task. Each single one of them will not only accept the decision reached by the committee but will also collectively work towards the emergence of that individual so chosen to emerge as the PDP flag bearer during its forthcoming primaries!

It is necessary that we emphasize that the philosophy behind the idea of a consensus candidate is designed to reinforce the key ingredients of our national unity and stability, democratic governance and the right of our citizenry to freely express their preferred choice. Finally, we urge fellow Nigerians to disregard the false insinuations regarding the work of the Consensus Candidate Committee as their decision will be made public the moment the consensus decision is reached''.