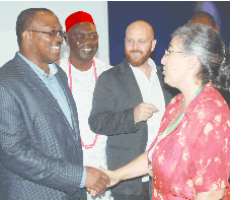 For many years, Onitsha was regarded as hosting the biggest market in West Africa. Indeed, the Onitsha Main Market served so many states in Nigeria and countries in Africa.

Onitsha was also known for its bustling literature that led to what was called Onitsha Market Literature. In fact, some of the greatest and popular secondary schools in Nigeria are located in Onitsha such as Christ the King College, Dennis Memorial Secondary School, Queen of the Rosary Secondary School. Onitsha is also known for its colourful culture and the civilization of her people.

However, most of these accomplishments were in the past. For many years, Onitsha was left to drift endlessly due to planlessness. The result is that today many people are leaving the town because of lack of attention to planning and general collapse of infrastructure. This was the Onitsha that Governor Peter Obi inherited in 2006.

Obi further argued that it is difficult to see a family in Anambra State that does not have somebody either living or trading in Onitsha.

Thus, as the Governor, he has devoted money, time and resources to the resuscitation of Onitsha. This was how it came about that one of the most radical actions taken by the Obi administration was a head-on confrontation with many gangs that seized Onitsha by the jugulars such as NARTO and Bakassi Boys. These organizations were laws unto themselves and terrorized residents that some of them left the town Obi, after appeals that ended in vain, decided to confront them. As a result, the outlaws had no choice than to leave Onitsha. This marked the beginning of the resuscitation of the city.

Perhaps jolted by the planlessness that had overtaken the city, the governor resolved that its development must follow a rational pattern. Thus, in 2006, he travelled to Kenya and persuaded the UN-Habitat to help the state prepare a structure plan for Awka, Onitsha and Nnewi. Based on the strength of his presentation, the body agreed.

On June 4, 2009 the master plans for the three main Anambra cities – Awka, Onitsha (and its environs) and Nnewi (and its environs) – were presented by the UN-Habitat. Presenting the master plans at the Conference Hall of the Women's Development Centre, the Director of UN-Habitat Programme for Africa and Arab States, Dr Alioune Badiane, urged the Anambra people to be thankful to the governor for the cities' structure plan.

Describing Obi as a genius and a visionary, he recalled how he came to Nairobi and with love and care for his people, uncommon with some leaders, was able to get from the UN-Habitat what nobody had done in the past and convinced the organization to prepare master plans for the state at 70% less the cost.

The UN representative said the good thing about the master plans was that successive administrations would have no option than to key into Obi's vision, love and desire for the best. He said that while other leaders were busy thinking of yesterday and now and how to destroy the state, Obi was thinking of what brought the state to where it was and how it would be redeemed.

Affirming that Obi had started the redemption, he called on people of the state to support the governor in implementation of the plans even as he pledged the continued collaboration between the UN-Habitat and the state.

Obi, who was full of gratitude to the UN-Habitat led by Dr Anna Ibaijuka and others that contributed to the success of the structure plan, lamented what lack of planning over the years had caused the state. In his words, 'the absence of planning over the years has resulted in the development of chaotic situations in our urban cities, poor sanitation, uncontrolled street trading, mounds of garbage and deteriorated road network.' The Project Coordinator, Dr Don Okpala, praised the commitment of the governor just as he thanked traditional rulers of towns affected by the plans for their cooperation.

Describing Obi's move as rare in this part of the world, the Managing Director of Urban Development Bank Plc, represented by Mrs Nicola Oshinowo, said that the bank would assist in implementation of the plan because it will have positive impact on people of the state. He said the plan, if properly implemented, would lead to urban regeneration and improved economic and social activities. Represented by the Deputy Director, Urban Development, the Minister of State, Federal Ministry of Works, Housing and Urban Development at the time, Chief Grace Ekpiwhre, commended Obi for his vision.

She noted that Anambra was the first state in Nigeria to sign agreement with UN-Habitat for the preparation of well rationalized and implementable structure plans for some of her cities.

Chairman of the occasion and traditional ruler of Awka, Igwe Dr Gibson Nwosu, said he was happy to witness the presentation of the structure plan, which he described as one of the most courageous actions taken in the state since its creation in 1991. He said the simultaneous development projects of the Obi administration were real.

In his remarks, one of the consultants, Prof Moses Ajayi, described Obi as a leader others should emulate. He said Obi was pioneering a new thinking and methodology in physical planning that will benefit the entire country and Africa, noting that God is using him for the greater glory of Nigeria.

Earlier, the Commissioner for Lands, Survey and Town Planning, Barr Peter Afuba, recalled the governor's efforts to ensure success of the project. He revealed that the state had already started preliminary arrangement for the ordered implementation of the plan and was discussing with the Urban Development Bank, Cities Alliance in New York among others.

With the cordial relationship between Obi and the UN-Habitat, it was not surprising that Onitsha was among the five fastest growing intermediate cities in the world showcased during the last World EXPO in Shanghai, China by the UN-Habitat. Speaking at the event, Mrs Laura Petrella of the UN-Habitat Urban Environmental Planning Branch said that the cities were chosen because of their density and commitment to development by their various leaders. Other cities chosen were from China, Morocco, Malaysia and Brazil.

Speaking during the presentation of Onitsha, Obi, who led the Anambra delegation, said he was delighted about the choice of Onitsha. He invited the international community to look closely at the city because of its potential. He also mentioned the challenges facing the town. Part of his speech reads: 'I am most delighted to attend this Photographic Campaign – Urban Edge featuring the presentation of Onitsha, selected to represent Africa among five fast growing intermediate cities of the world at this Expo in Shanghai, China.

The photos of Onitsha taken by the UN-Habitat Team from 14th July to 2nd August 2010 availed us the needed information to better appreciate and understand the dynamics and potential of urbanization in Onitsha. From my own perception, the dynamics of Onitsha are potent, being increasingly fuelled by its fast growing population, attracted by the expanding commercial, educational, industrial and religious activities. Coupled with this is the strategic location of the town as a node, gateway and river port. With Onitsha realizing other future development projections such as provision of a rail station and an airport for cargoes, it is poised to becoming a vibrant global city in the West African sub-region.

'I am aware that for Onitsha's growth to be sustainable, it needs to overcome several development challenges including slums, inadequate urban infrastructure and basic services due to pressure from increase in population, poor sanitation and refuse disposal system, uncontrolled street trading, overcrowding and congested transport system, poor condition of roads and drainages and serious environmental pollution.

'…Permit me to inform you that my government, working with UN-Habitat, prepared and adopted a 20-year Structure Plan for Onitsha to decisively tackle all these problems and position the town for sustainable growth. I see this presentation as another impetus for a strong commitment to the implementation of these city development plans.

'Anambra State is participating in this event to learn about other cities and to acquire new knowledge and strategies on how to better manage Onitsha and to build partnership with other key stakeholders. This Expo provides me with a unique opportunity to draw attention of the global community to the needs of Onitsha in the areas of Physical Planning services (such as appropriate legal and institutional frameworks), infrastructure development, environment and urban safety.

No doubt, the challenges of developing Onitsha are enormous, requiring substantial internal and external financial support and assistance in order to fully realize its vast potential. I therefore make bold to request for the assistance of participating organizations such as international donor agencies, development partners, corporate bodies and the private sector to the challenges and potential of Onitsha city in particular and Anambra State in general.'

It is good to note that the people of Onitsha appreciate what the governor is during not just in Onitsha but in all parts of the state. This is reflected in the words of the traditional ruler of Onitsha, Igwe Alfred Achebe, who, following the successful presentation of Onitsha town as among the five fastest growing cities in the world, thanked and commended Obi not only for the attention he pays to the three main cities in Anambra but also the entire state.

Igwe Achebe, who spoke through his representativeat the Shanghai World Expo, Dr Mike Areh, said under successive administrations in Anambra, Onitsha as well as other towns in the state witnessed retrogression until Obi came on board and started showing strong interest and, indeed, worked towards reversing the retrogression. Dr Areh said with what he had seen in China and how seriously the UN-Habitat took Obi, there was hope for Anambra.

Areh, who said he participated in all the bilateral meetings as the representative of Igwe Achebe with the state government delegation alongside delegation from other countries whose cities were equally chosen, emphasized the need for enough sensitization of residents of Onitsha on the efforts of the state government toward getting it right in Onitsha.

Recalling what the UN-Habitat said that prompted them to be interested in Onitsha and other towns in the state, he appealed to people of the state to continue to give the governor maximum support for what he called the international recognition of his efforts in the building of Anambra. In his words: 'Ordinarily, I am not an emotional person, but when the UN-Habitat people talked about how Governor Obi came to their office in Kenya to plead for their assistance towards the production of structure plans for Awka, Onitsha and Nnewi, one could see the absolute love for the state in action.'

Also speaking at the event, the head of UN-Habitat in Nigeria, Prof Johnson Falade, who was also in China for the EXPO, explained how the cities in Anambra degenerated systematically until Obi decided to reverse it. He called on the international community to assist the governor, especially on the project of turning Onitsha to international destination for business. As Onitsha has been chosen as one of the fastest growing intermediate cities in Nigeria, we await and see the direct impact of that choice on Onitsha in the coming years.