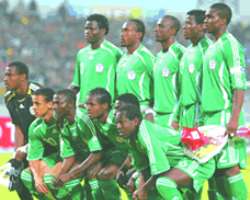 Owoblow, as he is fondly called for his heroics in his heyday, was reacting to last Sunday's disappointing outing by the Super Eagles in Conakry, where the Austin Eguavoen-tutored team lost to lowly rated Syli Nationale of Guinea. According to him, the team was bereft of all the characteristics of a typical Nigerian team.

'I watched the Nations Cup qualifying match between Nigeria and Guinea in Conakry last Sunday and I was not only disappointed, but really felt bad with the way the Nigerian team played,' the former prolific left winger began in a telephone chat with Saturday Sunsports.

'While the game was going on, I told the people that were watching the match with me that we no longer have Nigerian football.

'A typical Nigerian team,' he continued, 'would run with the ball, contest for it in the midfield and mesmerise the opponents from the flanks, while the defenders would remain like the Rock of Gibraltar.'

The former Shooting Stars of Ibadan dashing winger, noted that the Midas touch left Nigerian football with the famous US '94 squad, and wondered why it has taken too long a time for the country to build another formidable squad with typical Nigerian football character.

'The Midas touch is no more there. We last saw a typical Nigerian team in the 1994 squad of the Super Eagles that won the Nations Cup for the country for the second time. We've not been able to build another team with the typical Nigerian football character since then,' he regretted.

Owolabi rejected Eguavoen's excuse that the absence of the duo of Osaze Odemwingie and John Mikel Obi of West Brom and Chelsea of England respectively accounted for the Super Eagles' loss to Syli Nationale of Guinea last Sunday.

'As far as I'm concerned, Austin Eguavoen's excuse that we lost the match due to the absence of Osaze and Mikel is immature. That comment is most unprofessional for a coach to make. A coach should take responsibility for the success or failure of his team,' Owoblow argued.

'The same person (Eguavoen) would have beaten his chest if he had won the match without the two players. He would have boasted that he was able to improvise for two key players that were not available for the game,' he reasoned.

The former Green Eagles' player regretted that the Super Eagles failed to play like a team in Conakry despite the fact that most of the players, who featured in the match have been playing together in the last three years.

'We have been playing the same set of players in the Super Eagles in the last three years and I expect that the players ought to have understood themselves by now. Unfortunately, whenever they get unto the pitch, they play as if they are complete strangers to one another.

'The truth is that our foreign-based players don't show the same level of professional attitude they display while playing for their respective clubs in Europe. They were just sluggish on the pitch last Sunday in Conakry,' Owolabi said.