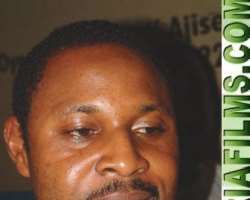 Except for a few people who are close to either of the movie stars, few are the people who know that the two have ended their 5-year rift.
Nollywoodgists.com gathered that the two reconciled a few weeks ago after they were involved in a controversial rift which bordered on tales of an alleged romance which linked Funsho Adeolu with Saidi's estranged wife, Fathia Balogun.

The war between them was so rife that it became an issue in the Yoruba movie industry and those who aligned and associated with Saidi would have nothing to do with Funsho. The battle lines were drawn. Saidi became suspicious of the closeness between Funsho and Fathia when they were still living together as a couple.

Saidi was said to have stormed a movie location unannounced and confronted Funsho, and another actor, Femi Branch and his estranged wife Fathia while the group were savouring plates of fish pepper soup and chatting at a restaurant in Ikorodu, Lagos after they finished at a movie location. Saidi was said to have disregarded the presence of his colleagues as he lashed out at his then wife for hanging out in a drinking joint with men. This attracted a lot of people at the joint and Saidi also ordered Fathia to leave the location for her matrimonial home at once.

Some people claim there was a slight scuffle, but others claim Saidi and Funsho were not involved in any physical confrontation. While the rift lasted a lot of respected people and young movie stars tried to reconcile the two actors but to no avail. At that time, the actors never saw eye to eye and it was an herculean task for any producer to try and have the two of them feature in the same movie. Not until a few weeks ago when Saidi and Funsho made up and Nollywoodgists.com gathered that many are very happy about the development.

Moreover, there are plans for Saidi and Funsho to work on a movie project together very soon. Though Funsho and Fathia have a cordial relationship, Funsho who is happily married to a beautiful wife has been trying to be diplomatic about his dealings with Fathia. The crisis threatened the once blossoming bond in the Yoruba movie industry.