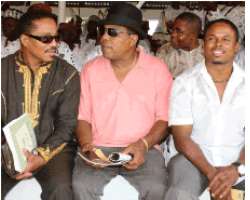 It was praises galore for telecoms giant MTN, from the brothers of the late pop music icon, Michael Jackson, for its successful sponsorship of this year's ninth annual Ofala Festival.

The brothers, who were members of the defunct famous Jackson 5 musical group, were excited to be part of the festival at the palace ground of the Obi of Onitsha, Anambra State. They equally expressed satisfaction at the level of organisation of the ceremony and the immense support from MTN.

The eldest of the brothers, Tito Jackson said: 'It's been a very exciting experience. This is a very colourful and well organised festival and it is interesting to see a corporate organisation like MTN providing support for the festival, which is what the people like. Everybody here is happy with MTN which is very good for the company.'

The three-day celebration, which started on October 7, witnessed the gathering of sons and daughters of Onitsha both at home and in the Diaspora, and notable guests from across the world. It reflected the rich cultural heritage of the Onitsha kingdom and its people. Anambra State Governor Peter Obi, his wife, Margaret, traditional rulers, members of the Anambra State House of Assembly, political stalwarts and business figures were some of the dignitaries that graced the event.

Apart from the Jackson brothers, other international dignitaries at the event were: the Mayor of Inkster Michigan, Mayor Hill Hampton; historian, Bruce Bridge and Hollywood actor, Walter James Jr. and Mrs. Gloria Williams. The Ofala Festival is an annual celebration of the cultural values and heritage of the Onitsha people which reflects the bond between them and the celebration of a renewed hope for peace and prosperity in Onitsha Kingdom.

The festival featured a variety of colourful activities and cultural displays. The highpoint of the event was the royal dance by the Igwe and members of the royal cabinet who filed out gracefully around the palace ground three times before the cheering crowd of excited indigenes, tourists and well wishers, greeting and wishing them well.

Over the years, MTN has championed the sustenance of various cultural festivals within the country in a bid to demonstrate its brand promise of offering 'so much more' and 'enriching lives.' This year alone, the company has sponsored 16 cultural festivals nationwide.