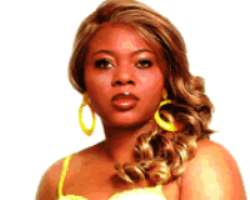 Chisom Oz-Lee
Chisom Oz-Lee has vowed not to remarry after losing her husband to chronic mylegnous leukemia. Although he knew he was going to die, her husband kept his medical condition away from her until she found out. Devastated by his death, the film maker who was drawn to acting in her secondary school days, has made a decision to live with her kids without a man forever.

Chisom was born to late F.O Nunobi and Susan Young in Enugu, Nigeria. Her versatility speaks volumes as she is a nurse, a script writer, a teacher and a movie producer. As a registered nurse, she has seen the devastating effects of female genital mutilation that makes giving birth very difficult for women who have under gone this age long tradition.

In a chat with Daily Sun, Chisom revealed that her plan is to use the medium of film making to stop the practice. She also spoke of her plans to acquire a mansion in USA where she resides. The talented artist/filmmaker hopes to do more medically related films in future to educate her audience about their bodies and provide the needed medical information. Excerpts:

What is new about Chisom Oz-Lee?
I just finished shooting a movie titled Unguarded. The movie parades stars like Ramsey Noah, Uche Jombo, Desmond Elliot and myself. Other actors that the movie boasts of are actors from known series in USA. It is a movie that will change the face of Nollywood.

What inspired your love for arts?
It was during my secondary school years; I was involved in a lot of extracurricular activities such as debate, dramatic society and so on. I picked up interest in acting.

As a producer, what qualities do you look out for in an actor or actress?

Spontaneity. The ability of being able to naturally initiate your own move that agrees with the script's concept. I have my favorite artists though.

How many movies do you have to your credit?
About 11 movies and nine was produced by me. I'm currently working on two which would be shot in New York.

What are the challenges you face in making movies?

In America, location is the issue, people over there usually like their privacy. It's pretty expensive to rent. One of the location we are negotiating for my next movie, Princess of Zanga, just one of the numerous location is rented for $10,000 dollar for 12 hours. It's crazy, so we are planning on restricting shooting in this location for only three days.

This is why it's imperative we have a Nollywood theatrical set. In Nigeria, some of the setbacks I experienced is how to by-pass traffic to get to location on time, unreliable power supply, some so called A list actors frustrate producers and subject them to their whims and caprices. I have high regards for actors with good work ethics and not because they are 'A' list actors.

How much do you spend shooting your movies?
It depends on the script and where it's shot. So far, the last movie I shot in red 2 camera cost me about $187.000. It's shot in New York, New Jersey and Conneticut. I would consider myself lucky spending this much because it would have been more.

What issues dominate your movies?
Health issues. One of my movies Lost Maiden extensively treats the issue of female circumcision. Some of my movies also deal with topics like gangrene, vomiting and diarrhea, cholera, depression in females, and so on. As a registered nurse, I intend to bring into my movies health-related issues to educate my audience.

Did your parents support you when you opted for arts?

They trust my judgment and have always been supportive of my decisions. The only concern my mum has is that she believes it doesn't make sense making movies without making profit.

Aside making movies, what else do you do?
I take care of sick people.
How did you feel when your better half died? Devastated. I felt his absence so much because he was a good man.

What was the last thing he said to you before he died?

He knew he was going to die, the doctor gave him one year to live. Out of that one year, I got to know few months down the line because he planned with his folks and hid it from me and I got to know when I became inquisitive. He said several times that he wasn't afraid of dying but was more worried about a young girl (referring to me) he took away from her parents to make a widow.

What was he suffering from?

Chisom Oz-Lee
He was diagnosed of chronic mylegenous leukemia.
Will you remarry?
No. I won't do that.
Do you have children with him?
Yes.
How did your in-laws treat you when you lost your husband?

I don't think the story of widowhood in African movies has much difference from the other. They all bother on one theme The plight of widowhood. They are all based on true stories and experiences. Mine was no exception.

As a nurse, what was the worst case you ever handled?

The first time I saw a patient with a sacral ulcer, with width and depth enough to accommodate a human head, it was scary. I couldn't eat the whole day.

Have you handled a corpse before?
Yes, severally. My first experience was scary, but later I got used to it that sometimes I forget I'm working on a dead body.

How do you unwind? Lying in my bed and watching my favorite TV shows/movies.

What would you love to change in Nollywood?
Recycling actors and stories. In addition, cutting down on excessive nudity and sexual scenes in our films. To me, our movies should be our cultural icon.

In your view, is the industry growing?
I will say yes. Our movies are getting incredible attention not because of their top-class quality, but because they reflect our lifestyle and that's why it's so demoralizing to see some gross nudity and exaggerated sexual scenes, it's really annoying.

Don't get me wrong, I am not a saint and I don't act like one but what essence does it add to movie to show how a woman wriggles her waist and a man performing a relentless push-up, for one minute in a movie. That's bullshit. Some families stopped watching some African movies due to its unpredictable sexual contents with no rating, especially movies made in Ghana. I guess they are all referred to as African movies. What makes Nollywood movies Nollywood, is the ability of parents and kids to seat as a family to watch and enjoy our stories, this also helps the kids to learn our norms and values, especially the ones over here who are curious about their Motherland.

What do you love most about life?
Being able to afford my basic needs without trodding behind anybody.

Do you regret going into movie production?
No, not at all. Besides the fact that it's tedious, filmmaking is my passion. It is a way I express myself to the world. I also use it as a medium to educate and entertain.

As a woman, have you been a victim of gender discrimination?

No. This is because I never found myself in a situation where male dominates.

Have you been made rich by making movies?
No, not yet. I know I will, I'm confident and optimistic.

What else do you hope to achieve?
To be able to afford a mansion in a quiet area of USA. I also want to adopt kids and raise them.

Any last words for your fans?
Whatever success I make in filmmaking, I owe it to my fans. I Thank them for their support and for having faith in me. I appreciate them immensely.

As a beautiful woman, how do you handle male admirers?

Same way I handle female admirers, no disrespect.
Would you marry a white man?
If I had a plan on remarrying, race wouldn't be a barrier.

When you ventured into film making, did you foresee your success?

I have never failed in any of my various endeavours. I never envisaged failure in filmmaking.