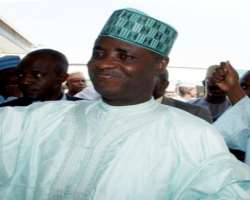 ABUJA, OCT 14, (THEWILL) - The Supreme Court today set a November 26, 2010 date to rule on the application brought by the 2007 Sokoto State Gubernatorial candidate of the Democratic People’s Party (DPP), Alhaji Mohammed Maigari Dingyadi seeking to withdraw an appeal challenging the decision of the Court of Appeal, Sokoto Division which refused his bid to amend his prayers and pleadings contained in the substantive action. The withdrawal of the application may pave way for any legal huddles standing on the way of the Court of Appeal, Sokoto Division from rendering its judgment in an appeal filed by DPP and Dingyadu, challenging the eligibility of the state governor, Alhaji Aliyu Wamako to run at the said poll.

Justice Christopher Chukwumah-Eneh, who presided over a five-man panel arrived at the decision after listening to arguments of all parties concerning the application to withdraw the appeal.

Counsel to Dingyadi, Lateef Fagbemi (SAN) in his submission argued that it was within the appellant's right to unilaterally withdraw his appeal as he cited Order 8 Rule 6 (1) and (4) to buttress his argument.

Fagbemi further said that it is therefore outside the law for any party to contend that the appellant needed their consent to withdraw his action, pointing out that since there was no pending application before the apex court with regards to the instant appeal, he is on a firm legal stand to seek to discontinue the appeal.

He reminded the Supreme Court of its series of decisions wherein, according to him, the apex court held that an appellant could withdraw his appeal without the consent of the other parties.

He said the respondents had no legal right to seek any consequential order in this respect since the appeal is not theirs.

He therefore asked the apex court to discountenance the application of Governor Aliyu Wamakko, the Independent National Electoral Commission (INEC) and the Peoples Democratic Party (PDP) on the ground that their arguments and authorities cited were not relevant to the instant appeal.

But counsel to Wamakko, Wole Olanipekun (SAN) told the court that the appellant cannot unilaterally withdraw his appeal bearing in mind the clear position of Order 8 Rule 6 (2) and (4) of its rules. Olanipekun said that the application for withdrawal is “vexatious and abuse of court process and must be arrested to forestall a drift in the judiciary.” He drew the attention of the apex court to the fact that two similar appeals were pending before the Abuja Court of Appeal and the Sokoto Court of Appeal on the same issue. According to him, it was an abuse of court processes to file two appeals in respect of the same subject matters at two different courts. Should the apex court be willing to allow Dingyadi to withdraw his appeal, he asked the court to make an order dismissing the appeal pending before the Sokoto Court of Appeal in order not to subject the judiciary to ridicule.

He submitted that if the court favours the application, it would be in breach of the court’s ruling on June 4, 2010, whereof it refused the plea to withdraw the appeal.

Recalled that the court had earlier on June 4, 2010 refused the appellant’s application to withdraw the appeal on the ground that the respondent were not heard.

He also added that the notice of withdrawal of the appeal before it which was granted on March 10, 2010 has been set aside.

But before the court reached the decision to restore Dingyadi’s appeal against his will, Fagbemi had contended that the order was properly made and cannot be set aside just because the respondents claimed that the court had no jurisdiction to do so.

“There is no law and none has been cited that records must be brought here (Supreme Court) before an appeal must be withdrawn”, he submitted.

“Once the court of appeal determines a matter unless injunction pending appeal, that court becomes functus officio and if an appeal is to be withdrawn, it is the (Supreme Court) that can decide the issue and not the Court of Appeal”, he said.

Consequently, Mahmud submitted that the withdrawal of the appeal by the appellant and its subsequent dismissal by the Supreme Court “was made in violation of the rules of the court and that even after the appeal was dismissed, the issue of cost must come up and according to him that was yet to be done.

In his own submission, Counsel to PDP, Dr. Alex Aigbe Izinyon [SAN] opposed the application to withdraw the appeal as it would amount to window shopping and taking the judiciary for a ride.

“We have to stop the drift before anarchy is allowed in the judiciary. No court can exercise jurisdiction unless the condition precedent is fulfilled. What the appellant has done is to subvert the administration of justice. I urge you to invoke your powers to dismiss the Sokoto appeal if you are minded to accede to the appellant/applicant’s motion to discontinue otherwise the administration of justice would be brought to disrepute,” Izinyon said.