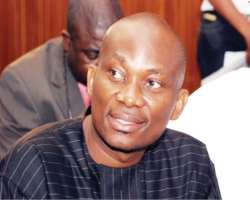 Specifically, the trios are standing trial for allegedly siphoning about N5.2 billion from the coffers of the Rural Electrification Agency domiciled with the Central Bank of Nigeria in the guise of paying over 65 alleged fictitious companies that were purportedly awarded contracts for Grid Extension and Solar Electricity project.

At the re-arraignment proceedings, the three sitting lawmakers pleaded not guilty to the charges, however, EFCC prosecution counsel, Godwin Obla, prayed the court for a short date within which to commence trial and to present witnesses, stressing that the EFCC paramount interest was in accelerated trial.

Counsel to the first accused, S I Ameh (SAN), prayed the court to sustain the bail earlier granted his client, promising that the sureties are ready to stand by the earlier commitments, the other accused persons aligned themselves with the pleas of the 1st accused. Justice Abimbola Banjoko, after listening to the 65-count-charges read out one by one to the three accused, adjourned the case till December 6 and 7 2010 for definite hearing.

Ugbane, Elumelu and seven others were originally arraigned on Friday 30th October, 2009 on a 130-count charge. The charges were separated thus: The three lawmakers among them were originally and jointly facing a 62-count charge while the other six accused are jointly facing a 68 count charge. The three lawmakers are: Hon. Godwin Ndidi Elumelu, Senator Nicholas Yahaya Ugbane and Hon. Jibo Mohammed. The other accused are Engr. Samuel Ibi Gekpe, Dr. Abdullahi Aliyu, Simon Kirdi Nanle, Engr. Lawrence Kayode Orekoya, Abdulsamad Garba Jahun and Barrister Kayode Oyedeji.

One of the fresh count charges reads: "that you Senator Nicolas Yahaya Ugbane, Hon. Ndudi Godwin Elumelu, and Hon. Jibo Mohammed, sometime in December 2008, in Abuja within the Abuja Judicial Division of the High court of the Federal Capital Territory of Nigeria, while serving as the Chairman, Senate Committee on Power, Chairman, House of Representatives Committee on Power, respectively; abetted the commission of an offence, to wit: Criminal Breach of trust by Public Servants in the purported award of 4 (Nos) Solar Electrification contracts to Helping Hands International Ltd, cumulatively amounting to N119,669,654.28( One hundred and Nineteen Million, Six Hundred and Sixty Nine Thousand, Six Hundred and Fifty Four Naira, Twenty Eight Kobo Only) which contract were unlawfully awarded from the 2008 Amended Budget of the Rural Electrification Agency (REA); and thereby committed an offence contrary to Section 83(b0 and punishable under Section 85 of the penal code Act Cap 532 Laws of the Federation of Nigeria(Abuja) 1990."