2011: IN BORNO, PDP REMAINS DIVIDED AGAINST ITSELF 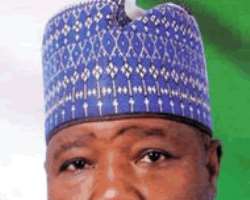 The 2011 poll offers another great opportunity for the Peoples Democratic Party (PDP) to prove that it could sail into the Government House, Maiduguri, Borno State. Since the return to civil rule in 1999, hoisting the PDP flag at the seat of power in Borno, has remained a dream for the self-acclaimed biggest party in Africa so much that the ruling All Nigeria Peoples Party (ANPP) boasts, 'Borno is an ANPP state!'

In 1999, the PDP appeared determined to clinch the governorship seat with the then gubernatorial candidate, Ambassador Baba Ahmed Jidda, who was later declared the winner of the April poll by the court. But the declaration only remained a legal pronouncement overshadowed by political reality and exigency of the time.  The then APP government of Alhaji Mala Kachalla had completed its four years tenure while a new government of Ali Modu Sheriff was in place before the verdict which returned victory to PDP came. Ahmed Jidda was later appointed the Secretary to the State Government  in a deft political move ostensibly orchestrated by Ali Sheriff to weaken the ranks of PDP.

By 2007, political pundits were unanimous in their predictions with PDP tipped to win the April 14 gubernatorial election but the defeat was fatal for the party in the state. The PDP was again left to lick its wounds and had since remain the greatest challenger and arch-rival of the ruling party in Borno. As ANPP consolidates its grip, each election year seems to be worse than the previous exercise for the PDP in the state.

The PDP in Borno commands an array of seasoned politicians,accomplished civil servants, professionals and technocrats in their various fields. Prominent among these political bigwigs and nationalfigures include astute politician and former Secretary to the Government of the Federation, (SGF) Ambassador  Baba Gana Kingibe; incumbent Minister of Works, Senator  Sanusi Daggash; Special Adviser to the President on National Assembly Matters, Senator Abba Aji and the party's two-time governorship candidate and former Presidential Liaison Officer (PLO) to the National Assembly, Alhaji Kashim Imam.

The old political warriors are led by the first executive governor of the state, Alhaji Mohammed Goni; his successor, Alhaji Asheik Jar'ma and a couple of second republic politicians. It is no doubt a party to be—- an assemblage of who-is-who in Borno politics, yet its asset in term of membership is its greatest undoing. The personality clashes among its leaders have in no small measure contributed to its successive electoral misfortunes.

Each election year, PDP members have always nurtured high hopes on the prospect of the party clinching the governorship position only to turn to forlorn hope on election day. Mohammed Abali, a PDP supporter in Maiduguri says the party does not look prepared to win in 2011.

'I am saying this because of what is happening in the party. Many of us are tired of persistent crises among our leaders because this is affecting us too. Some of us even feel the fighting is deliberate so that individual stalwarts of PDP could go to Abuja to tell our national leaders that things are bad here and they could negotiate for something; I mean get  support in cash.“

For about two years, the party leadership battled itself over the control of the party structure such that elections of the party executive were conducted twice even as they were subsequently dissolved . Similar intrigues and political machinations also resurfaced in the local government congresses with Senator Sanusi Daggash group struggling to take control of the party from his erstwhile political ally, Kashim Imam.

Just recently at the official opening of the Jonathan 2011 Presidential Campaign office in Maiduguri, the hostility among theleaders reached its crescendo as supporters of the party's two-time gubernatorial candidate, Kashim and that of Ambassador Saidu Pindar, a gubernatorial aspirant engaged in a free-for-all that left one person dead. Such is the enormity of animosity among the leaders.

Kashim remains one of the biggest financiers of the party in the state since 1999. His financial commitment to the party's programme and activities in the state has been described by the party's elders and some youths as encouraging but his critics insist 'he is the biggest problem of the party.' He has been accused of 'double-standard, fraternizing with Governor Ali Sheriff and even getting patronage from the ANPP government.'

Borno State Chairman of PDP, Alhaji Baba Basharu in a recent interview with Daily Sun however maintained he was yet to establish the veracity of the allegation.

'Well, I have been hearing that Alhaji Kashim Imam has been fraternizing with Sheriff. Some people even alleged that he got a contract from the ANPP government being supervised by his brother but I don't have facts to back these claims. I don't have documents to authenticate these allegations.  So they are still rumour as far as I am concerned,' he submitted.

But Kashim, in a reaction, maintained he was being accused wrongly by his detractors and 'over-ambitious politicians in the party,' adding that he remains a loyal and faithful party man. 'Time will vindicate me in all these,' he added.

He also confirmed to Daily Sun that he attended the peace meeting called by the leadership of the party in Abuja to end hostility among its members even as he expressed doubt on the workability of the agreements reached at the meeting.

Like the edible walnuts in their hard shell, separated by thick wall, the PDP in Borno has remained a divided party despite several peace meetings held to address the imbroglio. But Kashim said the unsavoury development in  the state was not different from what is obtainable in other states.

'Tell me, is there any state in Nigeria where the PDP does not have crisis? From Kano to Rivers, Bayelsa to Plateau, Oyo, Ogun to Taraba or Adamawa, it is the same story everywhere,' he noted.

While it may be true that Borno people yearn for a change, the present state of PDP in the state appears quite discomforting, a cause of concern to the average PDP faithful in the state who expects the party to exploit the internal bickering in ANPP and the bottled anger towards Sheriff hegemony from the citizenry. At present, no fewer than five gubernatorial aspirants including the first executive governor of the state, Mohammed Goni had picked the PDP Expression of Interest and Nomination Forms for the 2011 gubernatorial ticket.  The development, some argued could strengthen democracy in the party and the state, but concerned members watch with bated breath, praying that the aftermath of the party primaries would not put the PDP in perpetual oblivion in the state. The 2011 poll will no doubt determine the survival or otherwise of PDP in Borno.