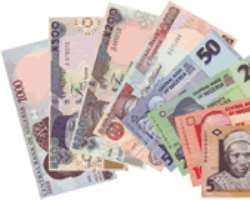 Naira
Nigeria recently budgeted seven Billion Naira for the 50th anniversary celebration. Given the way Nigeria organized past events, nobody doubts the fate of this huge amount of money with 2/3 of it ending up in private pockets.

We are presently ranked 94th in world economy (a far cry from the number 20 we aspire to be in the year 2020) but nonetheless remain number three in Africa and arguably the most important nation in West Africa with a sophisticated financial market (by regional standard) spreading its influence in the sub-region, and a population of 150 Million (world 8th) against Ghana's 20 Million ,a GDP of $166 Billion compared to Ghana's $14.9 Billion and a per capita income of $1,159 compared to Ghana's $676. Again our population is ahead of Japan and Russia which gave us the largest domestic market in Africa allowing for economies of scale across the continent.

Yet we remain trapped in a vicious circle of poverty and underdevelopment as government failed to fulfill its obligation to the citizens; creating perennial problems of weak institutions, security problems and macroeconomic instability. Whether there is need for celebration is also a subject of huge debate with majority of Nigerians saying the nation had not( in the past 50 years)delivered on its promises in the areas of food ,shelter ,security, employment, transport, primary healthcare and education, which fundamentally are the reasons for the existence of governments.Corruption became a way of life with very weak institutions to fight it (ironically institutions like EFCC, ICPC, and POLICE were weakened to give space for the leaders to escape their crimes).

With these huge deficits the next Nigerian leader (come May 2011 )has a daunting task to steer the country towards the path of growth, development and prosperity giving the fact that all hopes are not lost on the country(for still not being listed as a failed state). The writer here believes in the resilience of the Nigerian state and its ability to recoil from the brink of precipice and bounce its way to competitiveness. The job of the new leader is clearly cut out for him and few areas of concern will suffice here namely:

1: STRENGTHENING INSTITUTIONS: I don't believe it was out of mischief our western friends like the US and UK continue to horn on us to eschew big man syndrome and create institutions that will outlive humans. It is the platform through which individuals, firms and government interact to create wealth and growth.

2-INFRASTRUCTURE: Extensive and efficient infrastructure is very vital for growth. Roads and railroads, seaports, airports, electricity and agricultural infrastructure are to be updated to world standard and there is the money to do so. The wasted years that saw our infrastructure in state of decay must be reversed. That's the difference with countries like Saudi-Arabia, UAE and KUWAIT who had used the money accrued to them to put in place network of roads and other infrastructure to prepare their nations for industrial take-off.

3-MACROECONOMIC STABILITY: Stable macroeconomic environment is essential for growth. The banks must be encouraged to lend at single digit interest rate to the real sector(as no business will break even at the current 25% lending rate), Government must bring down inflation, streamline tax regimes and remove duplicity as well as bureaucratic and administrative red-tape and make investment attractive to potential investors. Our government, for lack of vision and confidence is into huge savings which is not good for growth. Monies are supposed to be spent on critical development projects like railways, refineries, power plants, dams, irrigation, dredging of water-ways instead of saving it.

3-HEALTH/PRIMARYEDUCATION: The hospitals must be upgraded, equipped and manned by adequate manpower to have healthy work force. There must be compulsory and quality basic education to ensure workforce has the basic skills attractive to investors. All children must have access to free compulsory basic primary education to secure and brighten their future. Kenya had not been able to provide large percentage of its population with education but the little it is able to give has been acclaimed to be of very high standard and this is what we should try to replicate, but also extend it to greater percentage of the population.

4: HIGHER EDUCATION AND TRAINING: With over 70 universities and tertiary institutions government must continue to fund education and formulate policy that will be science/Technology driven and interfacing with industries. It is not enough to have a faculty of mechanical engineering like say University of Nsukka without having interface with ANAMMCO and securing cooperation with regards to training and funding for research and development and possible production of vehicles and ownership of patent. Example there are lots of cooperation between MASSASUCHETTES INSTITUTE OF TECHNOLOGY (MIT) BOEING industry and NASA where most of its research are done.

SECURITY: There can never be growth and development in a climate of crimes and insurgency. The momentum on Niger Delta amnesty programs must be sustained. The police must be trained, equipped and motivated to fight crimes. The Justice system must be overhauled to ensure that criminals get punished for their crimes. Situation where death sentences are never carried calls for concern-for example since coming of civilians we have not heard execution of armed robbers carried anywhere yet robbers keep killing in numbers daily. In Aba town banks close at 12 noon for fear of being attacked by armed robbers. That's not good enough for a country that aspires to develop.

Above are the basic requirements for industrial take-off which are factor driven and there is no short-cuts to them. If we aspire to be among the first 20 economies in the year 2020, we must first have these factors on ground or we forget it. Wishing the PRESIDENT GOODLUCK.