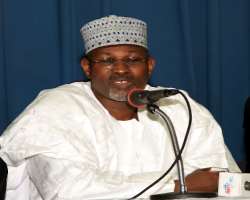 
ABUJA, Oct 11, (THEWILL) – Professor Attahiru Jega today painted a gloomy picture of the preparations for the 2011 general elections and warned delays in approving a fresh timeline could spell doom for the polls.

The INEC boss specifically cautioned that if the National Assembly delays the legislation for the time line extension beyond November, it could affect the commission’s plan for both the Registration of Voters and the general elections negatively. Yet he expressed optimism that May 29, 2010 swearing-in date remains sacrosanct.

Jega spoke when ambassadors of the European Union countries led by Ambassador David Macrae visited him at the commission’s headquarters in Abuja.

"We are getting conflicting signals and if there are any delays in the National Assembly, it will affect us. The faster they are able to complete the amendment process, the better for us. If we have to get extension around November or December, then we will be back to square one. We do not want any extension that would affect the May 29th handover date," Jega said.

Nonetheless, Professor Jega assured that though the challenges facing the commission are huge, the commission was determined to give Nigerians credible elections in 2011 and beyond, adding that the commission sees the production of new voters Register as a ‘National Emergency’.

Also he disclosed that the federal government had implemented about 80 percent of the recommendations contained in the report of Justice Mohammed Lawal Uwais on electoral reforms adding that there are still challenges being faced by the country’s electoral process.

On the Direct Data Capture Machines, Professor Jega acknowledged that the procurement of the machines had suffered some setbacks, but said the commission was on top of issues.

"The acquisition of the DDC machines has reached an advanced stage we have had some setbacks but we have made tremendous progress, the training of the trainers will commence next week.

"On the recruitment of ad hoc staff we have signed a memorandum of understanding with the National Youth Service Corps [NYSC] and very soon we will commence the training of the trainers next week. We are calling on our donor basket particularly the European Union for support both technically and financially. We are going to provide a level playing field for all contestants in the 2011 elections," he added.

Jega said although the commission is worried about the delay in amending the constitution and the Electoral Act as requested by the commission, it has another game plan to ensure the success of the elections and voters registration.

"We have a plan B which we are keep in our chest we are committed as a commission to the success of the voter registration and election on the new timeline. The background was that when we appeared before the NASS we gave a confidential timeline so technically we are waiting for the amendments before we announce the new timetable once we get that extension there is no doubt that things will be much more relaxed," he said.

Earlier the leader of the delegation the European Union Ambassador to Nigeria David Macrae had told Jega that they were in the commission to get information from INEC on its level of preparedness for the elections noting that "our main interest is regarding a new timetable for the elections and the level of your preparations. We are also here to show our support to the Commission.

"We want to also use this occasion to inform of the EU exploratory mission which will start tomorrow. The mission will later metamorphose into the EU support group to INEC we are very aware of the challenges and the pressure to conduct a free and fair elections and we are ready to partner with the commission, we are going to provide support and technical aid not only on the election day," he added.