ANOTHER KALAKUTA IN ONITSHA, WHERE ILLICIT DRUGS, SEX THRIVE 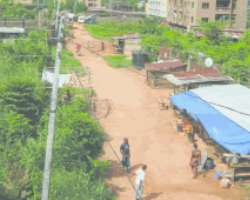 Tucked within the boundary between Onitsha and Obosi, behind an Army Barracks is Solar Lawrence Road, the unofficial headquarters of illicit drugs in Anambra State. It was the thick choking smoke of marijuana that announced another dimension of human activity on the narrow road that led to this doppers' enclave one early Saturday morning.

Eight out of ten commercial motorcyclists plying Awada routes in Onitsha along   MCC junction may not know the location of Solar Lawrence Road by any other means, but by simply placing two fingers on your lips and feigning smoking they'll exclaim 'oh yes, let's go' provided you can pay the right fare since the area attracts a special fare on Okada. Apart from being a jungle of sorts threaded only by brave hearts, the route leading to Solar Lawrence Road is deplorable due to erosion and neglect.

In this area of Onitsha,   every resident is a smoker. Those who don't smoke do so passively. Wheeling and dealing in cannabis sativa popularly known as Indian hemp, Igbo or marijuana and other narcotics is their stock-in-trade.

Jamaican reggae legends like Robert Nester Marley, Peter Tosh , and artistes like Prof. Linkin, the jogodo master who sang popular lyrics calling on governments to legalize Indian hemp may have wasted their precious time singing out their hearts, because at Solar Lawrence Road, it's done with impunity. 365 days in a year, youths 'burn down the walls of Babylon' with their lighter and Rizla.

Sunday Sun spent some days in the ghetto and the decadence was quite amazing and depressing .

Startling revelations. Solar Lawrence Road, Awada used to be a thick forest behind an Army barracks inhabited by few poor and homeless individuals . The wheeling and dealing in marijuana along the street was a pastime of barrack boys who saw the bush paths as shields for their indulgence and illicit trade.  With the urbanization of Onitsha, residential real estate mostly four storey buildings have been erected in the area thereby attracting families to the area. Since then , the narcotics trade has been flourishing .

A large cartel supplies narcotics from Asaba, the Delta State capital while users from far and near converge in the area unhindered. The narcotics are subsidized in this part of Nigeria. 'king size' marijuana for instance sells for N100, the 'middle size' goes for N50 while the smallest size goes for N20. Among the users, two fair complexioned ladies were spotted puffing away as if their life depended on marijuana . Though homeowners in the area have a landlords association, the 'real landlords' are dealers in narcotics . They're untouchable . Complementary products in the area include dry gin and other spirits, nylon envelopes for rationing the weeds and various native concoctions including paraga, 'cow tail' and dongoyaro laced mixed locally made spirits popularly known as kai kai.

The Army connection
Sunday Sun learnt that the illicit drug business thrives in the area because of the involvement of some soldiers . A resident in the area who identified himself as Anayo said 'this place is no man's land and many people you see here smoking are soldiers and others live in the barracks. Some soldiers bring the narcotics and they will resist any attempt to disrupt their operations tenaciously'. Some men in Army camouflage were spotted puffing way without hindrance. Further investigation revealed that detachments from the Nigerian Army raid the enclave once in a while arresting smokers and dealers and confiscating their 'stock' but they have not been deterred. A twisted logic brings them back.

Their greatest enemy
A well-known method the police, including the Special Anti- Robbery Squad(SARS) in Anambra   has devised to raise illicit money from hapless citizens in the state is by combing and raiding secluded areas in search of Indian hemp smokers and dealers. Some innocent passers-by are arrested and detained in the process until money 'exchanges hands'. Obviously the area is a no-go-area for the police. Any rookies who dared step into the dungeon didn't live to tell their stories while others had scars to deter them from ever venturing into an uncharted sea.

The boys at Solar Lawrence Road are battle-ready for the police anytime. The Police from Awada Division under whose jurisdiction the area falls have avoided the area like a plague. Some policemen in two patrol vehicles from the station were reportedly overpowered in the area and beaten to a pulp with their vehicles vandalized.

A Corporal attached to the division said he doesn't go for patrols in the area even when he needed money, because 'I need to train my children first before I die so I'm not in a haste to go yonder'

On Sundays
Solar Lawrence Road is not too different on Sundays. In the morning , it's a replica of Marakana  field at Ajegunle in Lagos. It's not menacing as suchs . Football teams play on the street and sweat-it-out.  Narcotics dealers and smokers take turns to play with wraps of marijuana and downing spirits recklessly .

In the evening, the atmosphere turns wild as merry makers block the road with local musical equipment and engage in wild frolicking with a bevy of ladies, food, cheap liquor, cigarettes, and of course narcotics.

Inside Government Restaurant.
One of the hot spots that make Solar Lawrence Road irresistible is Government Restaurant. Owned by a 'woman of substance' said to be a local government health officer, it derived its name from her connections among the soldiers. Once you enter the restaurant, there's no shaking. The place is a haven of sorts for drifters too and they only eat, drink, play snooker and get merrier.

In the night, live bands play and half-nude ladies dance seductively to mapouka music to entertain men of unruly libido.Tables with assorted drinks and meat adorn both sides of the road to accommodate the crowd . Some portion of land belonging to the Nigerian Army was cleared for this purpose.

The 404 Joint
Few meters from Government Restaurant is another joint for lovers of dog meat.

A wooden shack with a red ribbon on top to indicate that meat is ready, this joint is patronized mainly by the Calabar residing in the barracks. At one corner of the shack, a few elderly sip paraga. A local concoction of cheap whisky and herbs. They all look grotesque with bulging yellow or red eyeballs, bloated faces and decayed teeth. Shadows of their old selves and a result of several years of riotous living. Despite this, they appear lively even in their degenerate state. These men don't have the strength to smoke marijuana again or give lustful pleasures to a woman. Lurid jokes are among their past time. Seated on broken benches, they do not mind the boisterous youths around them who remind them of their heydays.

The landlords association employed some vigilante operatives to guard the neighborhood, but not surprisingly they focus mainly on the inside streets while avoiding areas around the barrack areas where crime thrives.

The predicament of residents
Some residents who spoke to Sunday Sun who did not want their names mentioned worry about the fate of children living in the area who may imbibe the life style in the area. For instance, the Chairman of Wisdom Landlords Association, Ozalla Layout, Chief Egojuluoyi Enemuo deplored the activities of these outlaws and lamented the association's helplessness . He called on Anambra State government to sanitize the area.

Speaking to Sunday Sun on the dangers of inhaling marijuana smoke , the Coordinator, Anti-drug Abuse Movement of Nigeria (ADAM), Dr. Anthony Idimogu said that it can trigger some allergic reactions which can worsen conditions of people prone to cancer and other forms of illness. He urged Anambra State government to take measures to check the nefarious activities of the drug pushers and users in the area and protect lives and property.

Reprieve on the way?
There's a flicker of hope for residents of Solar Lawrence Road and its environs . Speaking to Sunday Sun on phone, the Anambra State commander of the National Drug Law Enforcement Agency(NDLEA),  Timipreye Zikiye said 'my boys have raided the place before , but the dealers regrouped . We are strategizing on how to effectively block any loopholes and storm the place to dislodge them and ensure that they don't come back. Anybody arrested among them shall also be prosecuted .'

Sunday Sun also visited the Onitsha Military Cantonment for comments from the Army. The Commander of the 302 Artillery Regiment, Colonel Patrick Miri was recently redeployed while the Acting Commander, Lt. Col. Akpan traveled on official duty. The Army Public Relations Officer, simply referred to as Mr. Patrick, refused to comment on the matter on phone saying that he will make out time to discuss one on one with our reporter later.

However, a Sergeant in the barracks who craved anonymity told Sunday Sun to expect something different very soon as the command has concluded arrangements to cleanse the area of all miscreants.  'Go behind the barracks now and you will see that the clearing of bush has commenced. Remember that the Federal Government through the efforts of Governor Peter Obi recently flagged-off the fencing project of the barracks. When the project is completed, the problem of these smokers and criminal activities within the area will be a forgone issue as there will be no hiding place for them', he said.